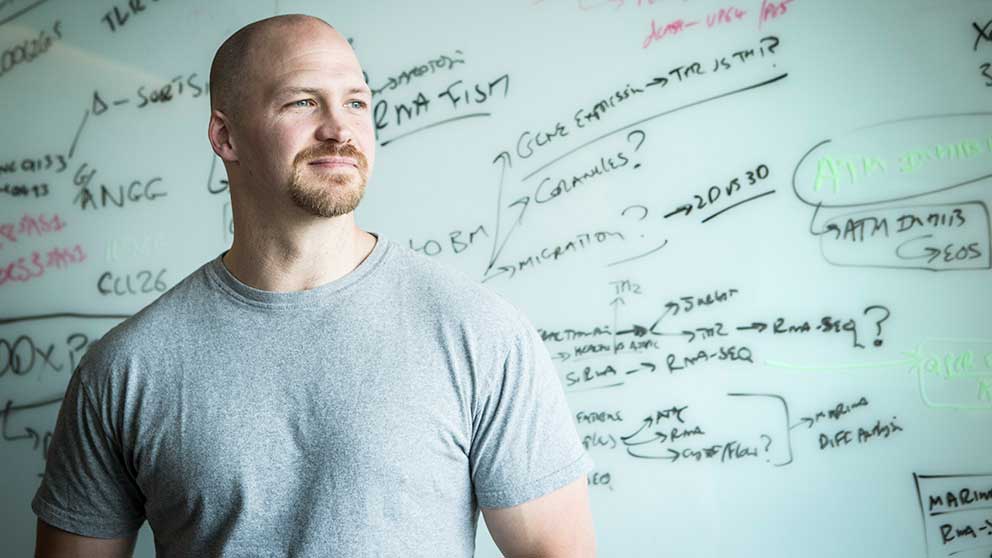 By studying a new and emerging class of genomic elements, Adam Williams is turning up new ideas about how the immune system functions.

Like explorers in a new world, scientists must often plot their course judiciously — deciding not only where to look, but also where not to look.

For decades, researchers have focused on genetic clues tucked away in a highly scrutinized portion of the genome: protein-coding genes.

“It is clear that these genes do not provide the full story.” says Adam Williams, an assistant professor at The Jackson Laboratory (JAX).

We are discovering a whole new world within the genome.

Williams and his colleagues have turned their attention to a poorly understood — and understudied — segment of the genome. This non-coding portion houses a new and intriguing class of molecular regulators known as lncRNAs (for long, non-coding RNAs).  These molecules were initially deemed genomic oddities.

Some two decades ago, only a handful of lncRNAs had been identified. It has since become clear that they constitute a vast and important group.

The field is so new that we don’t actually know how many lncRNAs exist, with estimates ranging from 10,000 to 100,000 — more than three times the number of human protein-coding genes.  To date, only about 100 have been studied in depth, and they are implicated in a variety of human diseases, from cancer to Alzheimer’s to heart disease. Moreover, lncRNAs are beginning to show promise as diagnostic tools. One lncRNA, known as PCA3, forms the basis of a molecular test now used to help diagnose some forms of prostate cancer.

Notably, Williams is one of only a handful of scientists worldwide who are studying lncRNAs to illuminate their roles in immune cell development and function.

“We are discovering a whole new world within the genome,” says Williams, who thinks lncRNAs have enormous potential in explaining individual variability in both health and disease.

“An interesting feature of lncRNAs is that they generally are very tissue- and species-specific — much more so than proteins. So while many cell types in the body express similar proteins, maybe only one cell type will express a particular lncRNA,” says Williams.

Although the field is small and unexplored, he has some big ideas about how these molecules might be operating in the immune system — and how they might one day be manipulated therapeutically in diseases such as asthma.

“It’s possible that by targeting just one lncRNA, we might be able to fundamentally alter immune cells and how they behave,” says Williams. That suggests lncRNAs could form the basis of novel diagnostic and prognostic tools. This idea is already being borne out in cancer, and it may also hold true for immune disorders like asthma.

Williams’ passion for science flows from a deep curiosity about biological systems and what makes them tick. “I’ve always been intrigued by how things work. Since I was a small child, I knew I wanted to do science — it was my favorite subject in school, and it always made sense to me.”

He was drawn to the immune system by its remarkable power, and its utility as a model system to figure out how genes work. As a graduate student at the National Institute for Medical Research in London, England (now part of the Francis Crick Institute), he exploited the advantages of the immune system to explore questions about gene regulation. Later, as a postdoctoral fellow, he began to delve into immune-related diseases.

“Those experiences gave me an appreciation of not just how important the immune system is, but also how beautiful and complex it is — and how devastating it can be when just one step in the process goes awry,” he recalls.

A recent study by Williams and his colleagues, including Richard Flavell of Yale University and Jorge Henao-Mejia of the University of Pennsylvania’s Perelman School of Medicine, helps illustrate the promise of his lab’s approach to understand lncRNAs. The work began several years ago, when Williams was a postdoc in Flavell’s lab and first hatched the idea to explore the role of lncRNAs in the immune system. He and his colleagues collaborated with lncRNA expert John Rinn at Harvard University. Rinn and his laboratory have pioneered techniques for systematically profiling the lncRNAs present in different cell types.

“Adam was way ahead of the game,” says Rinn. “He had the foresight that lncRNAs would be important in the immune system, and he really went after them.”

Rinn explains that at the time, most researchers were confining their studies of lncRNAs to cell-based models, because it wasn’t clear that engineering mice with defective lncRNAs would yield interesting — or interpretable — results. But Williams took the big leap to mouse models. His reward: a remarkable result that shines a bright new light on the immune system.

In their paper, published last August in Nature, the researchers describe a novel lncRNA in mice that regulates the lifespan of a key subset of immune cells. These cells circulate in the blood and typically are short-lived. But if they persist too long or proliferate abnormally, they can cause excessive inflammation, such as that found hypereosinophilia syndrome and other inflammatory disorders such as asthma. 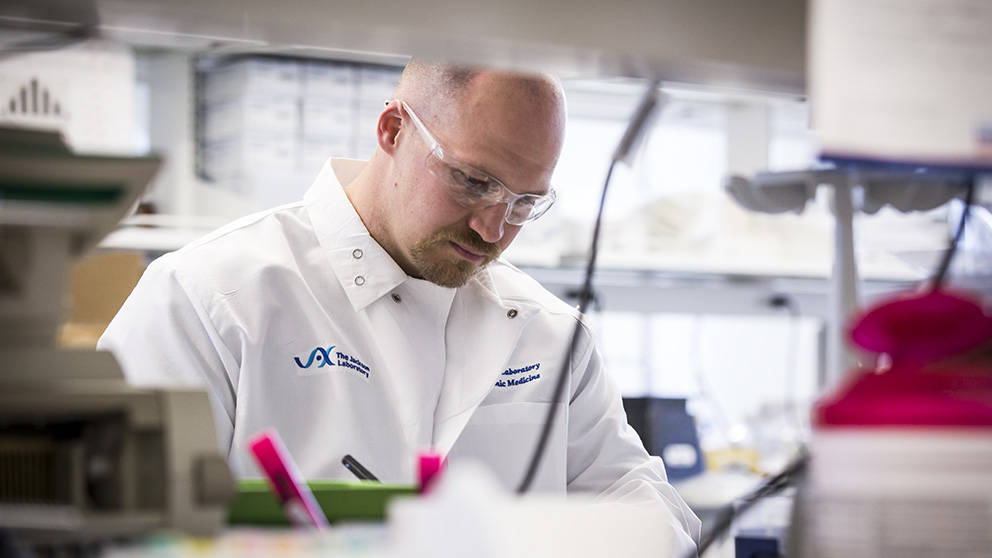 In his own laboratory at JAX, Williams is focused on understanding the function of human lncRNAs in mechanisms of immune system function and dysfunction. “We hope to shed more light on complex immune diseases such as asthma,” he says.

Nearly every project in the lab revolves around a different human cell type. These include key immune cells, such as Th2 cells, which play a prominent role in allergic responses, and eosinophils, which drive much of the tissue damage and remodeling that unfolds in asthma. Williams’ team collects some of these cells directly from asthma patients, providing a critical window on the biological processes that underlie this disease.

He also probes the cells that line the lungs and upper airways. The biology of these cells is interesting because the cells persist at a unique interface: one side contacts air, the other blood. Williams and his colleagues have developed a three-dimensional culture system that recapitulates this unique environment. Remarkably, these “lungs-in-a-dish” produce mucus; extend tiny, finger-like projections (called cilia) that beat and help remove foreign particles that enter the airways; and respond to viruses — just like their counterparts in the body. The system provides a critical test bed to study mechanisms of immune regulation in the lung and analyze the functions of specific lncRNAs.

Ultimately, these multi-faceted efforts could point to better ways to intervene. “If we can understand how immune cells are acting, and why they are overreacting in diseases such as asthma, then hopefully we can find ways of suppressing and silencing them,” he says.

“The ultimate goal is to be able to personalize therapy — that’s really where the field wants to go,” says Williams. “If we can help realize that goal, that would be amazing.” Amazing because scientists will help lay the foundation for a new generation of more precise asthma treatments. In turn, these new tools will give doctors the power to prescribe therapies that are more directly targeted at the root causes of illness.