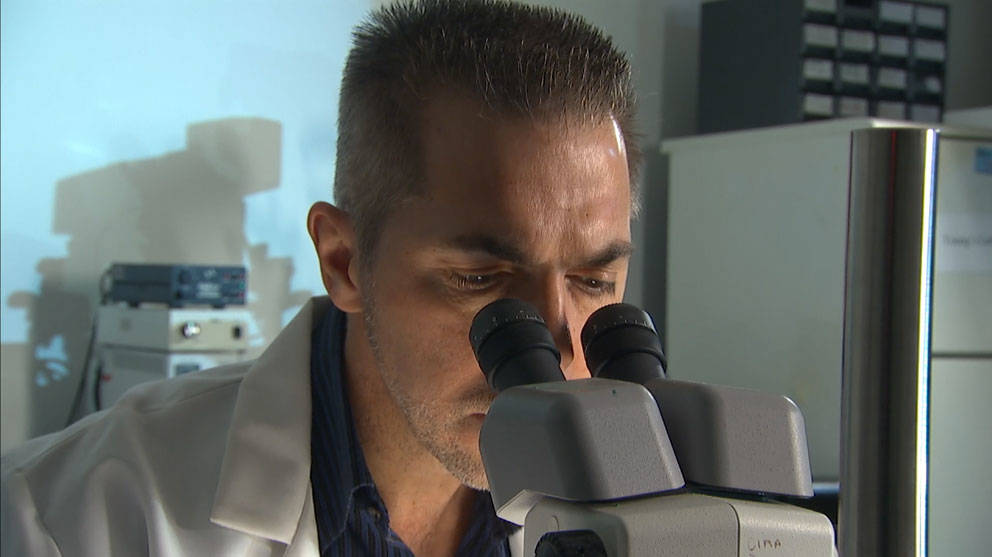 My time in Bar Harbor was one of the most transformative events in my life. The experience had a profound impact on me and helped shape who I am today, both as a person and as a scientist.

Robert Lanza was not raised in a home that nurtured his scientific interests.  So when he landed as an awkward but ambitious teenager at The Jackson Laboratory’s Summer Student Program in 1973, it was like a light coming on in a shadowy room. Now, more than 40 years later, Lanza himself is a bright light — and a bit of a bioscience rock star — using stem cell therapy to lead the way into the emerging field of regenerative medicine.

“I grew up in Stoughton, Mass.,” Lanza explains. “My father was a professional gambler; he worked at night and slept during the day in the house. I had to go out and find things to do on my own.” He spent a lot of time exploring large tracts of undeveloped land around his neighborhood. “I looked at the birds, caught turtles and flying squirrels and turned over rocks to look for salamanders. I was always thinking about nature and the universe, wondering how it all worked,” he says.

Fortunately, Lanza’s innate curiosity found support in a public school science classroom. With the help of an interested teacher, he became the youngest winner of the school’s science fair and went on to take first place at the Massachusetts State Science Fair. At 14, having successfully altered the genetic makeup of albino chickens so they developed pigmentation, he made a serendipitous connection with Harvard neurobiologist Stephen Kuffler. Kuffler welcomed the precocious teen as a frequent visitor to his laboratory and helped him publish a paper about his chicken project in the journal Nature.

“Eventually, he wrote a letter of recommendation to The Jackson Laboratory on my behalf,” Lanza says. “And the people there recognized that I was a kid with the kind of curiosity that could drive a career in scientific research, so they invited me to the summer program.”

Lanza says the summer at JAX was life-changing.

“It was my first time away from home,” he says. “The opportunity to get away from a dysfunctional background, to be at the Jackson Laboratory with thoughtful, distinguished people who talked with me about science, to wake up in my room at Highseas [the Laboratory’s historic mansion where students are housed] with the ocean outside my window – it was very exciting and fun. If I hadn’t had that experience and those interactions, I would never have had the confidence to pursue my interest in science.”

And Lanza’s career has been a remarkable success by any measure. After that transformational summer in Bar Harbor, he finished high school and went on to earn both his bachelor’s degree and a medical degree from the University of Pennsylvania. He spent summers working in the laboratories of Gerald Edelman, M.D., Ph.D., at Rockefeller University and Rodney Porter, Ph.D., at Oxford, immunologists who shared the Nobel Prize in 1972 for determining the structure of antibodies.  Another summer was spent in the laboratory of Jonas Salk, developer of the first successful vaccine against polio.

Lanza also studied in the laboratory of noted psychologist B.F. Skinner. He travelled to South Africa and worked with the South African heart transplant pioneer Christiaan Barnard, helping to find ways of overcoming the problems of organ shortage and tissue rejection.

“That experience led me directly to cell therapy and stem cell research,” he says. In the course of his early research, Lanza developed methods to make embryonic stem cells without destroying embryos and to create pluripotent stem cells using safe, non-viral techniques.

His team was the first to clone an endangered species – a type of wild ox known as a guar – and also successfully cloned another type of endangered ox using the frozen skin cells of an animal that had died in captivity a quarter of a century earlier.

Now, Lanza is a leader in the growing field of regenerative medicine — using pluripotent cells to grow replacement tissues and organs. His pioneering work has led to effective treatments for autoimmune conditions such as multiple sclerosis, Crohn’s disease and lupus in laboratory animal models.

As chief scientific officer of Ocata Therapeutics, which employs stem cell therapy to develop treatments for macular degeneration, glaucoma and other causes of visual impairment, Lanza says regenerative medicine is positioned as the next big thing in modern medicine.

“We’ve already demonstrated that stem cells can safely replace damaged retinal cells in humans with healthy cells,” he says. It’s only a matter of time, he adds, before scientists and physicians turn to stem cell therapy to treat a host of other conditions.

“There are great new therapeutics on the horizon,” he says.

Lanza has received many high-profile awards and recognitions for his work, including being named to TIME magazine’s 2014 list of the “100 Most Influential People in the World.” In 2010, he received both an NIH Director’s Award and — along with genomicist Craig Venter, philanthropist Bill Gates and President Barack Obama — recognition as a “mover and shaker” in shaping the future of biotech from the journal BioWorld. Wired magazine presented him with its 2005 Rave Award for Medicine. His research was featured in a U.S. News and World Report cover story and he has been written up in the magazines Fortune and Financial Times.

Lanza has authored hundreds of papers and scientific volumes, as well his 2009 book, “Biocentrism: How Life and Consciousness are the Keys to Understanding the True Nature of the Universe.”

He acknowledges that the book, which explores the link between human perception and the physical and biological realities of the world, has garnered both praise and derision from his colleagues in science. But, as he has done throughout his career, Lanza takes the long view, undeterred by this controversy. “These things,” he says with confidence born of experience, “take time to be accepted.”