JAX® Mice are named according to the guidelines set by the International Committee on Standardized Genetic Nomenclature for Mice, and strain names are revised as necessary to conform to these guidelines.

Learn the highlights of mouse strain nomenclature with our short, interactive tutorial.

Understanding appropriate nomenclature is essential due to the complexity of strain names for substrains, transgenics, knockouts, etc. To enable broader awareness of nomenclature, The Jackson Laboratory has provided the resources below:

The Mouse Genome Informatics (MGI) database is a reliable source of official nomenclature for mouse genes, alleles, and strains; it follows the rules of the International Committee on Standardized Genetic Nomenclature for Mice.

Nomenclature for chemically induced and targeted mutations follow the same guidelines as described for mice with spontaneous mutations (see “Nomenclature for Mice with Spontaneous Mutations”). Alleles are designated either by the chemical mutagen or by the abbreviation “tm” (targeted mutation), followed by a number and the laboratory registration code, and selection criteria superscripted to the gene symbol (e.g., Apoa1tm1Unc).

Nomenclature for mice with spontaneous mutations

Spontaneous mutations occur very rarely and may alter the normal phenotype of a strain.

Mice with spontaneous mutations are useful for elucidating basic biological processes, studying relationships between gene mutations and disease phenotypes, and modeling human disease. Research applications are included on strain data sheets in the JAX® Mice Database. The applications are compiled using a number of information sources (please refer to Mouse Information Resources), but they are not all-inclusive: rapidly advancing biomedical research continually uncovers new applications and uses for spontaneous mutants. Investigators are strongly encouraged to research a recommended mouse model to be sure it is appropriate for their research.

Gene symbols are italicized. Symbols for recessive genes begin with a lower case letter, and symbols for dominant, semi-dominant and co-dominant genes begin with an upper case letter, followed by lower case letters. The gene and allele symbols for mutant genes are the same until the gene is cloned (see “Nomenclature for cloned mutations,” below). Different alleles of a gene may be represented by a superscript to the gene symbol. Nomenclature for a strain with a spontaneous mutation is as follows: C57BL/6J-Aw–J. When a mutation is maintained on an inbred strain background by mating homozygotes together, the gene symbol is given once. All offspring are affected mutants (phenotypically manifest the genetic mutation).

In 1994, the International Committee on Standardized Genetic Nomenclature for Mice voted to superscript a mutation’s symbol to the cloned gene symbol. For example, the shiverer (shi) mutation in the myelin basic protein (Mbp) gene becomes Mbpshi. If the original mutation symbol already has a superscript, the mutation and allele superscript symbols are placed on one line in the new superscript and hyphenated. For example, the myelin deficient (shimld) mutation becomes Mbpshi–mld). When a mutation occurs in a cloned candidate gene, the first letter of the gene symbol may remain upper case, and the inheritance pattern may be conveyed in the allele symbol. For example, the recessive yellow (e) and sombre (Eso) alleles of the melanocortin 1 receptor (Mc1r) gene become Mc1re and Mc1rE–so. Mutant allele names stay the same. In this catalog, we list the previous symbol and cross-reference to the new symbol. Former gene symbols are listed under symbol common names in the strain detail. For a complete listing of nomenclature rules and guidelines, see www.informatics.jax.org/mgihome/nomen.

A large number of GEMM strains (Genetically Engineered & Mutant Mice) are congenic strains. Congenic strains are produced by transferring a mutation from one genetic background to a specific inbred strain through repeated backcrossing. The congenic strain and the inbred partner are expected to be identical at all loci except for the transferred locus and a linked segment of chromosome. The size of the segment and the possibility of transferred alleles on other chromosomes depend on the number of backcross generations.

A strain is considered fully congenic after ten generations of backcrossing (N10). However, strains carrying mutations that have been backcrossed onto the background strain for at least five, but fewer than ten, generations are considered incipient congenic strains and may be useful in a variety of research areas.

Most strain names for congenic mice carrying spontaneous and targeted mutations, as well as for a few strains congenic for histocompatibility loci, have not followed standard congenic nomenclature for historical reasons. In response to concerns from the scientific community about the origins of genetic mutations and differences in phenotype due to genetic background effects, the International Committee on Standardized Genetic Nomenclature for Mice and The Jackson Laboratory made a commitment to correct these inconsistencies.

Effective June 1, 2000, a large number of JAX® Mice strain names were changed to indicate the mutation’s strain of origin. Strains are listed by their new names, with former names indicated in the JAX® Mice Database. Examples of these name changes are provided below. Congenic nomenclature is adopted once a strain has reached the fifth generation of backcrossing (N5), although a strain is not considered fully congenic until N10. The decision was made not to change the nomenclature of some strains that carry multiple alleles derived from different origins, either because of the way the strain was generated or because the nomenclature would cause additional confusion. Additional information on the origins of transgenes and genetic mutations may be found through the JAX® Mice Database by conducting a search using the gene symbol or stock number of interest.

Congenic strains are designated by a compound symbol consisting of the host strain (usually abbreviated), a period, the donor strain (also usually abbreviated), a hyphen, and the italicized symbol of the differential locus or loci and allele(s) (e.g., B10.129P-H12b). When the donor strain either is not an inbred or is complex, the symbol “Cg,” denoting congenic, is used. Congenic nomenclature is applied to incipient as well as to full congenics. The generation number is included in the strain detail.

The genetic background of many congenics is a mixture of C57BL/6J and a 129 substrain (designated either B6;129, B6;129P, or B6;129S; see explanation that follows on “Revised Nomenclature for Strain 129 Mice”). However, the backgrounds of some congenic strains are unknown, derived from more than two progenitor strains, or have genetic contributions from an unknown or outbred source. The background of such congenics is frequently designated as “STOCK.” Formerly, most spontaneous and induced mutations transferred by backcrossing from a mixed background (e.g., either B6;129 or STOCK) to an inbred background were not described by conventional congenic nomenclature. However, many Genetically Engineered and Mutant Mice strain names have been revised to more clearly indicate the origin of a mutation (e.g., B6.129P2-Apoetm1Unc/J).

The Jackson Laboratory supplies a large number of histocompatibility congenic strains. In some cases, multiple lines are derived from the same donor strain and are distinguished by a number and/or letter in parentheses (e.g., B10.129P-H11b(10M)/SnJ and B10.129P-H46b H47b(21M)/Sn).

In, 2000, a large number of JAX® Mice strain names changed to indicate the mutation’s strain of origin. Examples of nomenclature changes

Note: This strain name should not be confused with that of a mutation maintained on a mixed B6;129P genetic background, where the strain abbreviations in the name are separated by a semicolon rather than a period (see Example 5). We have included additional information (strain type, control information, background and donor strains, and generation number) in the congenic strain detail both in our printed literature and on our website to more clearly delineate the genetic background.

Note: The Cg (for congenic) is used when there are multiple donor strains or the donor strain is of mixed genetic background.

Note: In this example, the Cg is used to avoid suggesting that both mutations arose on DBA/J while showing that the misty (m) coat color marker and the diabetes (Leprdb) mutation are maintained in repulsion.

Note: Additional contributing genetic material may be included in parentheses following the donor strain. In this example, a targeted mutation has been transferred from a mixed B6;129P background to a third inbred strain. The genomic region flanking the targeted gene is 129P2-like because of the origin of the ES cell line, but an unknown amount of the strain’s genome may be of C57BL/6 origin. The amount of donor strain DNA, both linked and unlinked to the differential locus, decreases with increasing generations of backcrossing.

Strain with a mutation carried on a mixed genetic background

Note: This is not a congenic, but rather a mixture of C57BL/6 and 129P2 (from ES cell line) and so is segregating alleles from these two strains. The comma between strain abbreviations was replaced with a semicolon to make a clearer distinction from the period in congenic nomenclature.

Strain with nomenclature that did not change, but that carries alleles from different origins

Note: This strain was made by mating together, not backcrossing, three individual congenic strains carrying differential alleles already on a C57BL/6J genetic background (B6.C-Igha, B6.PL-Thy1a, and B6.CAST-Gpi1). 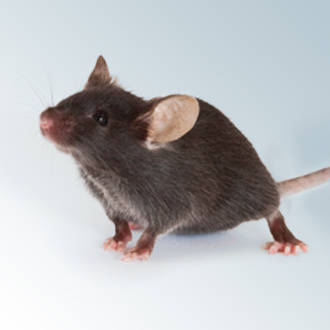 Learn How Hybrid Mice are Named 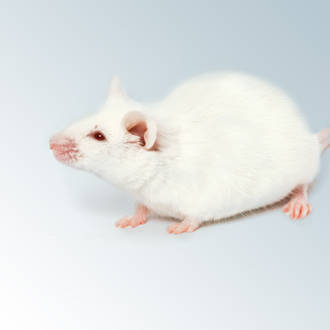 Learn How Inbred Strains are Named 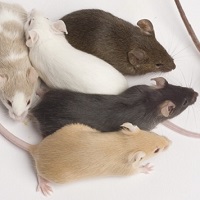 Learn how genetically
engineered and mutant mice are named.

We take a look at the history of genomic sequencing, where it's going in the future, and the power it has to potentially treat diseases...

The Jackson Laboratory’s Bar Harbor campus was home base for the Roux Institute at Northeastern University’s Biotechnology Applied Lab...

JAX Professor Peter Robinson has spearheaded an effort to make phenotypic data (a collection of our traits) accessible and computable...

A spotlight profile of Martine Seignon, a research data analyst specializing in data visualization in the Single Cell Biology Laboratory...

A research team at JAX is boosting the speed and accuracy of tumor sample image analysis, for multiple cancer types,...

This poster was inspired by the September/October image of our 2014 JAX® Mice, Clinical & Research Services Calendar, representing the...

This poster was inspired by the January/February image of our 2014 JAX® Mice, Clinical & Research Services Calendar, representing the NSG™...

BALB/cJ and BALB/cByJ: How can I choose? I’m so confused!

Learn how the original BALB/c strain separated into two major substrains (BALB/cJ and BALB/cByJ) and how to decide which one...

Our Animal Health Program is composed of importation, diagnostic, clinical medicine and pathology groups and is designed to ensure the...

The Animal Health Program at JAX ensures the health of our mouse colonies by preventing the entry of pathogens and minimizing opportunities...

A visual guide to the genes influencing coat color.

Learn the highlights of mouse strain nomenclature with this poster.