MRL/MpJ
Stock No: 000486 | MRL
Place Order
Sized to accommodate orders of up to 50 or more. Ask Customer Service for details. 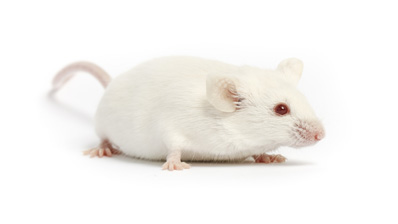 The MRL/MpJ mice are large but docile to the point that males rarely fight. They are the parent and control strain for for MRL/MpJ-Faslpr (Stock Nos. 000485, 006825). Despite carrying the normal Fas gene, MRL/MpJ mice also exhibit autoimmune disorders, but symptoms are manifested much later in life compared to those the MRL/MpJ-Faslpr mice. Starting at about three months of age, levels of circulating immune complexes rise greatly in the MRL-Faslpr mouse but not in the wildtype control, MRL/MpJ. Also beginning at 3 months Faslpr mice exhibit very severe poliferative glomerulonephritis, whereas in the MRL/MpJ controls usually only mild glomerular lesions are detected. MRL/MpJ inbred female typically die at 73 weeks of age and males die at 93 weeks. This compares to a lifespan of 17 weeks in the female and 22 weeks for males in the mouse homozygous for Faslpr. See MRL/MpJ-Faslpr (Stock No. 000485) for additional information. As a strain developed as the control for MRL/MpJ-Faslpr, MRL/MpJ mice are useful in the study of their comparable defects and diseases.

MRL/MpJ, and one of its ancestral strains LG/J, display heightened wound healing relative to a panel of other inbred strains. At 4 weeks post-injury, 2mm ear punch wounds heal to 0-0.4mm in MRL/MpJ mice but are still 1.2-1.6mm in C57BL/6 mice. At 15 days post-injury C57BL/6 show a maximal closure of 30% reduction in ear hole size while MRL show 85% reduction. The process of healing in MRL/MpJ mice is faster, more complete, showed increased swelling, angiogenesis, fibroblast migration, extracellular matrix deposition, and decreased scarring and fibrosis. Additionally, hair follicles and accompanying sebaceous glands regenerate to a much greater degree. The other ancestral strains of MRL/MpJ (C3H, C57BL/6, and AKR) do not display this enhanced healing. Bone marrow transplantation shows that the MRL/MpJ healing phenotype does not readily transfer with bone marrow and remains in the irradiated host tissues. Enhanced healing of cardiac wounds has also been reported in MRL/MpJ mice. In this model, a very high mitotic index (10-20%) is found, similar to that seen in non-mammalian tissue regeneration. Using F2 and backcross mapping of MRL/MpJ-Faslpr x B6 progeny McBrearty et al. identified multiple wound healing QTLs, Heal2 and Heal3 ,on MRL/MpJ chromosome 13 in the region of D13Mit115 and D13Mit129 respectively; Heal5 on MRL/MpJ chromosome 12 in the region of D12Mit233; Heal1 on chromosome 8 of C57BL/6 in the region of D8Mit211; and a highly suggestive locus on MRL/MpJ chromosome 7 in the region of D7Mit220. In crosses between MRL/MpJ x SJL/J, Masinde et al. identified 10 QTL for wound healing, confirming and extending the findings of McBrearty et al. Chromosomes 1, 3, 6, and 13 each have a single QTL with that on chromosome 13 being statistically suggestive but not significant, while chromosomes 4, 7, and 9 each have two statistically significant QTLs. (Clark et al., 1998; Leferovich et al., 2001; Kench et al., 1999; McBrearty et al., 1998; Masinde et al., 2001.)

Microarray analysis and SELDI ProteinChip analysis identified multiple genes and proteins that have varied expression in the ear punch wounds of MRL/MpJ-Faslpr versus C57BL/6. The changes in expression patterns suggest that in MRL/MpJ mice there is less of an inflammatory response and an earlier transition into tissue repair than is seen in C57BL/6. (Li et al., 2000 and 2001.)

Blankenhorn et al. found that MRL/MpJ females heal faster and more completely than males. Some Heal QTLs are sexually dimorphic with Heal2, 3, 7, 8, 10, and 11 having greater effects in males and Heal4, 5, and 9 having greater effects in females. Castration improves wound healing in MRL/MpJ males to nearly the degree seen in females, but ovariectomy does not improve the degree of healing seen in MRL/MpJ females. (Blankenhorn et al., 2003)

In 1960 Dr. Margaret Dickey crossed the achondroplasia (Npr2cn) bearing subline of AKR/J to C57BL/6J then sibling intercrossed for 5 generations before again crossing to C57BL/6J in an effort to move the achondroplasia mutation onto a genetic background not prone to high incidence of leukemia. The F1 offspring of that backcross were then backcrossed 5 times to C3H/Di then outcrossed once to AKR/J and the line sibling intercrossed for 3 generations before then being bred twice to LG/J then sibling intercrossing at each generation. At some point in this process the achondroplasia mutation was bred out and at F12 the lymphoproliferation (lpr) mutation arose and two separate sublines were then bred apart through selective sibling breeding, with the wildtype subline named MRL/n and the subline bred homozygous for lpr named MRL/1. After several generations of separated inbreeding the lpr mutation was transferred from the MRL/1 subline onto the MRL/Mp subline then 5 cycles of cross-intercross was done to create the closely related MRL/Mp-+/+ strain, which has become MRL/MpJ, and the MRL/MpJ-Faslpr strain. The mathematical estimation from the breeding protocol is that the MRL genome is composed of 75% from LG/J, 12.6% from AKR/J, 12.1% from C3H/Di, and 0.3% from C57BL/6J. This strain is homozygous for a, Tyrc, and MHC haplotype H2k (Murphy and Roths, 1978). MRL/MpJ-Faslpr (Stock Nos. 000485 and 006825) and the MRL/MpJ control are kept congenic with each other by backcrosses to the MRL/MpJ wildtype every 5-10 inbred generations.