It is a widely accepted fact that de novo protein synthesis is required for spatial memory formation that depends on the hippocampus. Recent and compelling evidence suggests there is a link between memory loss and the regulation of hippocampal protein synthesis in aging. In fact, alterations in protein expression have been reported in the hippocampus as early as midlife, suggesting that dysfunction in protein synthesis and/or degradation may be an early causative event in the genesis of age-related memory failure (for review see Schimanski and Barnes, 2010). With a growing percentage of the U.S. population above the age of 65, it is imperative that we focus on the identification of mechanisms (e.g. misregulated proteins) that underlie the onset of memory deficits. This is an ideal time point for clinical intervention. Thus, an in-depth analysis targeting the hippocampus membrane proteome, relative to memory status, is a powerful approach to identify novel proteins associated with ‘normal’ aging memory decline. To discover and quantitate hippocampal membrane proteins associated with memory deficits in ‘normal’ aging and AD, I developed and validated a strategy that combines careful phenotyping, hippocampus plasma membrane enrichment, modern protein quantification, and bioinformatics to identify candidate mechanisms of memory failure that will be directly tested in vitro and in vivo.

Recent work from my lab demonstrates that the onset of spatial memory deficits results, in part, from misregulation of membrane bound TRPC3 ion channels that control neuronal excitability in the hippocampus (Neuner et al., 2015) (Fig 1). 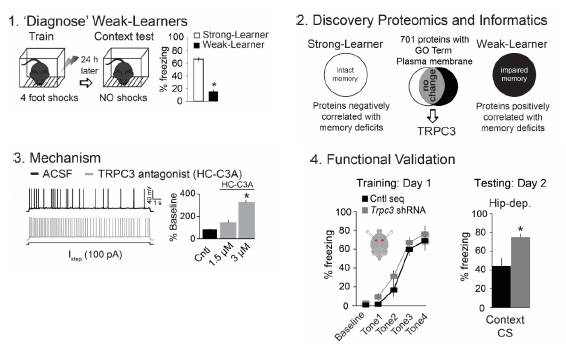 Fig 1. Proof of concept that our proteomics approach nominates novel targets involved in learning and memory. 1. Schematic of contextual fear conditioning and memory test used to ‘diagnose’ aging 8 mo mice as strong- or weak-learners. 2. Significant enrichment of TRPC3 in plasma membrane proteome of weak-learner mice was revealed using proteomics, implicating for the first time a role for TRPC3 in the regulation of hippocampal neuronal excitability or memory. 3. Whole-cell recordings from hippocampal slices show TRPC3 blockade with HC-C3A increases neuron excitability as evidenced by an increase in action potentials (APs) triggered in response to depolarizing current injection. 4. In line with our hypothesis, knockdown of TRPC3 in the hippocampus using AAV9-shRNA enhances memory tested on hippocampus-dependent memory test (contextual fear memory test, Day 2). Our recent studies confirm downregulation of TRPC3 using AAV9-shRNA prevents memory deficits in normal aging mice, and mitigates deficits in the 5XFAD mouse model of AD (unpublished), making it a high-value target for drug discovery and rationale drug design.

AD can be divided into different types based on age of onset and genetic predisposition. Early-onset familial AD (FAD) is rare and usually manifests by age 60. In contrast, sporadic, late-onset AD (LOAD) accounts for the vast majority of cases and typically begins after 65. The cognitive and pathological changes that occur in both types of AD are thought to be highly similar. While it is known that LOAD is highly heritable, ~70% of the heritable variation remains unexplained. Finding the source of this heritability is a central focus of modern human research in AD. It is posited that unknown alleles of small effect sizes with very low minor allele frequencies, along with complex gene-gene interactions, and gene by age interactions contribute to a significant portion of this heritability. To compound this problem, there are currently no animal models of LOAD. To overcome these barriers, we developed an alternative resource to current AD models designed to be morerepresentative of the marked inter-individual variability observed during the progression of AD. Our novel AD genetic reference panel harbors ‘humanized’ FAD mutations, thousands of naturally occurring variants in 35 known LOAD risk genes identified by GWAS, as well as millions of additional variants that may affect AD symptoms but have gone undiscovered due to current limitations of animal and human studies.

This arm of my research program is driven towards 3 goals: 1) Determine the effect of genetic variation on cognitive decline and ‘classic’ beta-amyloid (Aβ) pathology and test whether genetic modifiers of FAD, or genetic factors influencing ‘normal’ cognitive aging, are associated with risk of developing LOAD in humans, 2) Evaluate a subset of AD and nontransgenic strains across the development of cognitive deficits using multi scale analyses (e.g. molecular, cellular, memory circuitry) to identify the mechanisms underlying the onset and progression of AD, and 3) Test the capabilities and limitations of our approach to prioritize therapeutic targets with high translational value. Our current toolbox for validation includes technologies to modify risk genes, knockdown proteins acting as drivers of disease phenotypes, overexpress proteins identified as protective, or regulate ion channel function to restore neuronal excitability and Hip- PFC functional connectivity (Fig 2) at early stages of the disease.

Overall, my lab combines a breadth of techniques to pursue research questions that will deepen our understanding of the alterations in protein synthesis, protein regulation and protein function that cause or increase the susceptibility of neurons and memory to aging-related dysfunction.

Fig 2. Hip-PFC coherence reflects path choice during Y-maze exploration. a) Mouse in a Ymaze at the point of path decision while LFP activity is recorded in PFC and Hip. b) Pseudocolor plots of average coherence during entries into the new arm (correct alternation, n=11) or the previous arm (incorrect alternation, n=6) reveal stronger coherence in high-β and low-γ bands for correct alternations (note that high-β and low-γ overlap). Line indicates moment of entry into the central region of the maze. c) Band pass filtered β and γ band components of the normalized LFP signals in the PFC (red) and Hip (blue) measured at the times indicated by vertical black lines. Choice specific differences in coherence are reflected in the different degrees of Hip-PFC phase similarity in LFP traces, especially in the γ range. Our new data demonstrates that Hip-PFC coherence is disrupted at the onset of memory deficits in AD mice.

The focus and aims of my research are particularly relevant to the mission of the National Institutes of Aging (NIA), National Institute of Mental Health (NIMH), and the American Federation of Aging Research. My research program involves personnel that perform behavioral assays, electrophysiology, microscopy and molecular assays. Additionally, each candidate target identified (or pathway) could be taken up as an individual project by a graduate student or postdoctoral researcher for detailed development. Personnel will benefit from my hands-on training and mentoring in a supportive environment.

My research addresses a major gap in traditional aging studies that merely correlate memory performance with changes in molecular signals and/or cellular plasticity across the lifespan, which is the lack of mechanism and demonstration of relevance in vivo. Equipped with innovative experimental models coupled with access to state of the art technology, my research is poised to reveal distinct genetic and molecular mechanisms that underlie changes in neuronal excitability, neuronal network function, and memory decline in aging and Alzheimer’s Disease.

Return to The Kaczorowski Lab