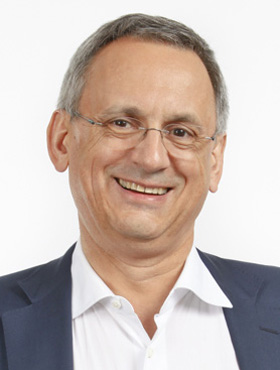 My career has focused on the understanding of the control of human adaptive immunity including in vitro and in vivo studies. My joining JAX allowed me to add two important new angles to my research. First, we are pursuing an in-depth genomics and epigenomics characterization of human immune cells. Second, we are developing models of human diseases through the grafting of genetically engineered human hematopoietic progenitor cells into immunodeficient mice.

Blood RNA profiling: We have extensively used blood gene expression profiling of patients suffering from a wide array of rheumatic and infectious diseases. This led us to identify some important pathogenic aspects of diseases such as systemic lupus erythematosus (SLE) (16,19,22,25) and systemic onset juvenile arthritis (sJIA (18). The transcriptomics studies showed that Infections induced by different microbes yield unique blood signatures (23). While we learned a lot from these studies, the advent of RNA-Seq demonstrated the importance of the non-coding RNAs (ncRNA), most particularly the long-non-coding RNA (lncRNA). We dedicated considerable efforts in the past at analyzing diseases of children based on the concept that the minimum of co-morbidities will help us resolve the disease-specific pathways. Though we will continue working on selected childhood diseases, we are now turning our attention to the analysis of chronic diseases associated with aging both on the steady state and following immune challenges such as vaccination.

Isoformics project: The isoformics project focuses on the long RNA reads (up to 12Kb) of the human transcriptome using the PacBio RSII system. This technology will allow us to study the generation of splice variants. Indeed, it is currently estimated that the ~20,000 human genes might give rise to as many as 100,000 splice variants. Importantly, these splice variants display unique and occasionally opposing functions. We expect that this analysis will provide a means to distinguish important physiological processes of immune cell differentiation/activation and will unveil variants associated with specific disease states.

Epigenetics project: In collaboration with Drs. Palucka, Stitzel and Ucar, we are interrogating the epigenome of immune cells in the context of health and selected immune diseases. Our efforts are currently focused on immune blood cells of healthy young adults and healthy elderly. We are also testing the hypothesis that epigenomic signatures might distinguish vaccine responders from non-responders, findings that will ultimately enable us to predict immune responses to vaccines.

The study of GM-CSF led us to discover how to generate dendritic cells starting from human hematopoietic progenitor cells (HPC) (4,7). We defined novel subsets of dendritic cells present in human lymphoid organs (8,10,12) and analyzed their functions(15,17,20,21) and their potential use in cancer (14) and infectious diseases. We found that human epidermal Langerhans cells preferentially enhances cellular immunity while dermal DCs preferentially elicit humoral immunity partly through the activation of follicular helper T cells.  Based on these findings, we designed novel human vaccines targeting DCs with fusion protein vaccines composed of anti-DCs antibodies linked to a variety of antigens. We also demonstrated that different vaccines were differentially activating different DC subsets. We are pursuing this later avenue of research as this will permit us to identify the basic principles behind vaccine potency.

Together with Dr. Palucka, we have used humanized mice to understand the human immune responses to infectious agents, such as influenza, and cancers such as breast cancer and melanoma. Joining JAX provided us access to novel strains of immunodeficient mice that might permit a better engraftment of CD34+ hematopoietic stem and progenitor cells (CD34+HSPCs). We will develop novel models of human diseases through the grafting of CRISPR-engineered human hematopoietic progenitor cells into immunodeficient mice. These studies are performed in close collaboration with Drs. Palucka, Shultz, Wang and Wu.

The main limitation of the current humanized mouse models is the poor reconstitution of the antibody responses. Currently humanized mice can be induced to produce significant amounts of IgM but very low amounts of switched isotypes consistent with the virtual inability of these mice to generate germinal centers, the immune sites for human B cell memory. The germinal centers are the site of a complex set of reactions that involve somatic mutations as well as DNA recombination (isotype switching) in the immunoglobulin genes. Follicular dendritic cells, follicular helper T cells and macrophages are working in a coordinated fashion for these events to occur productively. The considerable genetics expertise of JAX Mammalian Genetics will permit us to engineer novel immunodeficient mice designed to support a fully functional human humoral immunity. We are following several approaches to reach that goal.

Uses genomic tools to characterize human immunity in both healthy and disease states.

I'm interested in a computational systems genetics approach to mediation analysis of complex traits in mice.

CDH is a defect in the diaphragm that allows the stomach and intestines to move into the chest cavity and cause...

Genomics, Transcriptomics and Proteomics of tumors and the immune system.