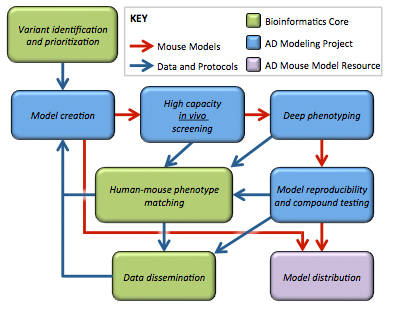 Alzheimer’s disease (AD) is a major cause of dementia, disability and death in the elderly. Despite recent advances in our understanding of basic biological mechanisms underlying AD, we do not yet know how to prevent AD or have an approved disease modifying intervention. Both are essential to slow or stop the growth in dementia prevalence.

The National Alzheimer's Project Act (NAPA) seeks to prevent and effectively treat AD by 2025 through innovative research on etiology, early detection, and therapeutics. In support of NAPA’s goals, one of the targeted areas of research identified at the National Institute on Aging (NIA) sponsored 2015 Alzheimer’s Disease Research Summit was the development of the next generation of animal models of AD that will prove more predictive in preclinical studies and thus accelerate the drug testing pipeline. While our current animal models of AD have provided multiple novel insights into AD disease mechanisms, thus far they have not been successfully utilized to predict the effectiveness of therapies that have moved into AD clinical trials. The NIA recently funded the Indiana University (IU)/Jackson Laboratory (JAX) Alzheimer’s Disease Precision Models  Center (ADPMC) to become the first MODEL-AD Center. The new center will leverage IU’s strengths in neurodegenerative research including 25 years as an NIA-supported Alzheimer’s Disease Center and considerable expertise in preclinical drug testing with JAX’s eight decades of expertise in mammalian genetics and disease modeling to develop, validate and disseminate new, precise animal models of late-onset AD. In addition, the MODEL-AD center contains Sage Bionetworks to provide expertise in data organization and dissemination. The MODEL-AD center brings together an international, multi-disciplinary team—including geneticists and genetics technology experts, quantitative and computational biologists, clinical experts in AD and neuroimaging, pharmacologists and world leaders in the development of precision animal models of disease—that possesses the collective ability to foresee disease modeling needs as they emerge on the international stage. This will allow the IU/JAX ADPMC to serve the AD scientific community effectively and efficiently. The center will generate new AD modeling processes and pipelines, data resources, research results and models that will be swiftly shared through JAX’s and Sage’s proven dissemination pipelines and to NIA-supported AD Centers, academic medical centers, research institutions and the pharmaceutical industry worldwide. Ultimately, this will accelerate the application of advances in animal models for the greatest possible medical benefit.

The Center was established with funding from The National Institute on Aging (U54 AG054345-01).  Aging studies are also supported by the Nathan Shock Center of Excellence in the Basic Biology of Aging (NIH P30 AG038070).