Numerous publicly funded projects are generating a vast resource of sequencing, biomarker and other data relevant to Alzheimer's Disease (AD), including projects such as the AD sequencing project (ADSP), the Alzheimer’s disease Accelerating Medicines Partnership (AD-AMP) and the Alzheimer’s disease Neuroimaging Initiative (ADNI) funded by the NIA. We are systematically collecting and analyzing as many datasets as possible to perform state of-the-art analyses to identify putative causative variants and biomarkers for AD. Utilizing these datasets ensures that the animal modeling and preclinical testing approaches align closely with human AD. 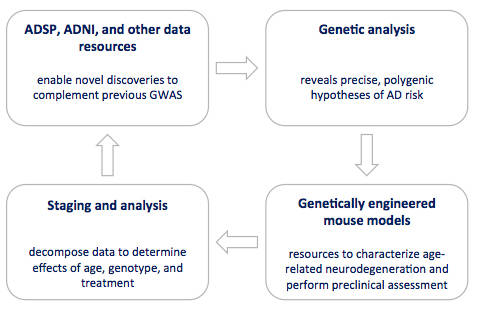