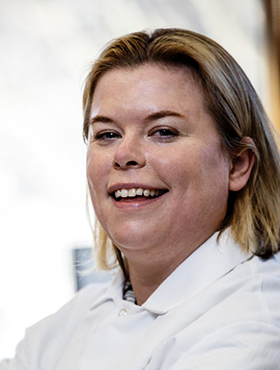 I currently hold a joint postdoc appointment with Drs. Gareth Howell and Stacey Sukoff Rizzo. My research in the Howell lab allows me to expand my graduate work on memory systems into clinically relevant models of Alzheimer’s disease. I am specifically interested in how genetic context interacts with Alzheimer’s mutations in order to mediate disease onset, disease progression and resiliency.

My role within the MODEL-AD center (model-ad.org) is with the Preclinical Testing core co-led by Dr. Stacey Sukoff Rizzo and Dr. Paul Territo (IU).  We aim to test therapeutic compounds nominated by the research community in newly generated late-onset Alzheimer’s mouse models.

"Investigating the complex interactions between APOE and TREM2, the major genetic risk factors for Alzheimer's disease"

Genetic mouse models for Alzheimer's disease (AD) have been widely used to understand aspects of the biology of the disease, but have had limited success in translating these findings to the clinic. In this review, we discuss the benefits and limitations of existing genetic models and recent advances in technologies (including high throughput sequencing and genome editing) that promise more predictive models. We summarize widely used biomarkers and behavioral tests for mouse models of AD and highlight best practices that will maximize translatability of preclinical findings.
Copyright © 2015 The Authors. Published by Elsevier Inc. All rights reserved.
View full list of publications