What to watch for in precision medicine in 2016 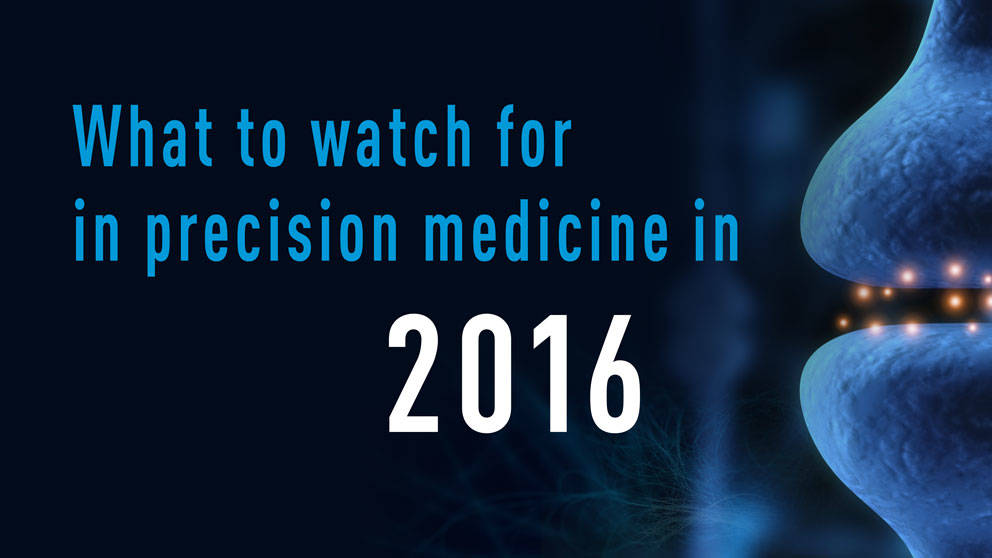 As 2015 comes to an end, a look back reveals tremendous progress in the precision medicine/clinical genomics space. This week also seems like a good time to think ahead to what may be the most exciting areas to watch in 2016.

Frankly, there are research areas and initiatives that are obviously going to continue to make headlines next year, so I won’t explore them here in any depth. In the obvious category are:

So what else is going on in the tech and disease research fields? Are there things that may be a little under the mainstream radar now but have the potential to make a big splash in the coming year? Here are a few thoughts.

The high-throughput sequencing world has been dominated by Illumina, and for good reason. For accuracy, economy, speed, support and more, Illumina’s machines deliver the goods, and the company has established a near-monopoly in genomics. There’s just one problem. To get the sequences, it’s necessary to cut the genome into small pieces—usually 150-250 base pairs long—sequence them, then “assemble” all the pieces back into the massive whole. Genome assembly takes computing power and expertise, and it misses some key parts of the genome. It also makes it very difficult to find structural variants and changes in highly repetitive regions, as these can look normal when the sequence is reassembled even when there’s a crucial mutation present.

A couple of companies with different technologies that deliver long-read sequencing look poised to make an impact in the near future. One, Pacific Biosciences (PacBio), has been around for many years, but high costs, low throughput and troubling accuracy issues kept it from gaining more ground. I won’t get into the technical weeds, but the PacBio has steadily improved the accuracy issues. Indeed, data generated on its machines played a prominent role in the “Platinum genome” session at this fall’s American Society for Human Genetics (ASHG) meeting, an effort to develop the best, most complete human genome sequences possible. It has remained expensive, as the platinum moniker implies, but its long-read technology provides much better sequence coverage than is otherwise available. Moving forward, PacBio has launched a new machine called the Sequel that leverages its existing technology but delivers much higher throughput at lower costs. With an average read length of around 10,000 base pairs, with many reads longer than that and with even longer average reads soon to come, PacBio may start expanding beyond the “high price, but long-read” niche it’s occupied.

The other intriguing sequencing technology poised for a breakthrough is nanopore sequencing, in which single DNA molecules are passed through a nanopore, a very small hole often formed by a pore-forming protein in a lipid membrane. As the DNA goes through the nanopore, changes in current indicate different bases. Although intriguing, nanopore progress has been stymied by technical challenges, such as controlling how quickly the DNA strand travels through the pore, and no nanopore-based sequencer was widely available until quite recently. Last year, Oxford Nanopore, the company at the leading edge in the field, launched a researcher access program for its “MinION,” a small sequencer that looks a lot like a USB flash drive. In the roughly 18 months since, the MinION has proven itself extremely useful for uses as diverse as tracking disease outbreaks to high school education. As with PacBio, improvements are coming rapidly, and automatic sample prep and larger sequencers with more throughput are scheduled for release next year. Nanopores have long been seen as potentially the most disruptive new technology in sequencing, and what happens 2016 will go a long way in determining just how disruptive nanopore-based sequencing might be.

The federal precision medicine initiative is understandably focusing its resources on cancer initially. Cancer genomics is already paying dividends in providing more precise diagnoses and, for some patients, more targeted therapies. But other medical areas are seeing real benefits as well, such as cardiovascular (CV) health and disease. Indeed, in a couple of recent talks I saw on the return of pathogenic variants found during genome screening, the term “familial hypercholesterolemia” (FH) appeared several times. Apparently it’s one of the most common secondary findings in healthy subject genome or exome data, and it’s an important one. Even one defective copy of the gene can make a person much more susceptible to high cholesterol levels and ultimately CV disease, so the standard cholesterol check becomes a much higher priority at the very least. The first so-called PCSK9 inhibitors, called Repatha and Praluent, are also based on simple genetics, as people without a functional PCSK9 gene are healthy and have extremely low blood cholesterol levels. The drugs received FDA approval over the summer, with a primary indication being to treat patients with FH.

The FH result is about as straightforward a scenario as you’ll find in clinical genomics, but as sequencing becomes more common, more complex genetic contributions will emerge for CV diseases such as cardiomyopathies and arrhythmias. Here’s where the precision of genome-based diagnosis comes into play, as it’s crucial for clinicians to be able to classify subtypes of heart failure. Understanding susceptibility to cardiomyopathy and other cardiovascular diseases and defining the cellular defects that cause hearts to fail and malfunction will pay huge dividends moving forward.

Of course, CV disease plays a role in everyday life, especially when there’s too little activity and too much of the western diet. It is hoped that the complex, predictive side of the field will help patients better manage their cardiovascular health. Researchers are identifying more and more genetic variants that contribute to the interplay between behavior, environment and genetics that makes us more or less susceptible to atherosclerosis and other CV diseases. Obviously a lot of factors contribute, but given that events such as stroke, myocardial infarctions and blood clots are sudden and very dangerous, knowing genetic susceptibility would be extremely helpful. I expect CV screening tests to become more common and more informative in the near future, so keep your eyes on discoveries in cardiovascular genetics in the coming year.

Anyone familiar with Alzheimer’s disease (AD) knows the basic pathology. Beta-amyloid plaques and tau protein tangles accumulate in neurons, which in turn degenerate and die over time, leading to cognitive impairment before death. But although both B-amyloid and tau are implicated in AD, the cause-and-effect mechanisms have remained elusive. And attempts to develop an effective AD therapeutic, many of them focused on the amyloid plaques, have mostly resulted in spectacular failures. Compound after compound produces promising preclinical data but falls far short in human trials, despite concerted effort and billions of dollars invested. The issue is widely recognized—in fact, the third installment of a three-article series on AD just published in Inside Science begins “Alzheimer’s is a graveyard for expensive drug tests.”

There are encouraging developments, however. Researchers are beginning to employ more powerful tools—including CRISPR—in their quest to identify the causal mechanisms underlying AD. Experimental models for the disease have been poor and have not provided sufficient equivalency to the human disease, leading in part to the failed drug trials. The new techniques will provide a far superior research platform for discovering drug targets as well as early biomarkers for AD. Biomarkers are a critical component for developing any successful therapy, as AD symptoms usually appear long after serious neurodegeneration takes place, and it’s likely far easier to preserve neurons than replace them after damage has been done. Greater understanding will also be gained into how known risk factors, such as APOE4, increase AD susceptibility, and what might be done to mitigate the risk.

Do I expect a prevention or cure for AD to be announced next year? No, I’m afraid not. But I think maybe, just maybe, the research that leads to effective prevention will be launched with an exciting finding that finally provides a robust therapeutic target. In the complex world of genomics our brains are more complex still, so it will not be an easy road. But as our population ages and the toll of AD grows, there are few that will be more important to travel.

Biomedical research has benefited from unprecedented advances in technologies and methods over the past decade. What took years to accomplish in the laboratory can now take months or even weeks. This is a very good thing, because human biology is also more complicated than we ever thought. It’s an exciting time, with formidable capabilities addressing formidable challenges, including those presented above. I for one am eager to see what discoveries highlight medical progress 2016.