2022 – an outstanding year of growth at The Jackson Laboratory

2022 has been a notable year for The Jackson Laboratory, with great achievements and many reasons to celebrate continued momentum for JAX’s mission to improve human health, including high-profile grants and major philanthropic gifts, engagement in numerous community outreach opportunities, and much more.

JAX community volunteers donated nearly 2,000 hours of time to support a variety of organizations in our local communities.

Equally as important as the expansion of JAX research programs is the investment in JAX employees. In 2022, JAX celebrated the opening of its Hemlock Lane apartments located within walking distance from the Bar Harbor campus.

JAX supports many causes associated closely with our research and education mission, including support to the Alzheimer’s Association.

In 2022, three employees were sworn into State of Maine Board positions including S. Catherine (Katy) Longley, J.D., who was appointed to a five-year term on the Maine Maritime Academy Board of Trustees.

In 2022, JAX received over $130M in new federal, peer-reviewed foundation and other external funding with an impressive success rate trending over 36% in the third quarter of the year. Approximately 90 awards will fund the diverse institutional research areas.

After over two years of rigorous analysis and sequencing of COVID-19 samples from across Connecticut, Maine, and California, JAX ran its final analyses of COVID-19 samples in the summer of 2022, having performed over 1.6 million PCR tests since the COVID-19 pandemic began in 2020. JAX was honored to play a role in strengthening testing capabilities and is grateful to community partners for collaborating with JAX in addressing the urgent need for COVID-19 testing.

JAX remains committed to the vital COVID-19 research conducted across its campuses. Of note, Peter Robinson, M.D., M.Sc., is working with hospital systems across the United States to pool COVID patient data and better define the scope of long COVID and provide better clinical insight for patients. In addition, Derya Unutmaz, M.D., and his team are utilizing cancer immunotherapy techniques to develop potential variant-proof treatments for COVID-19.

Recognizing the critical need for research and progress on less commonly known diseases, JAX marked an important step in the expansion of its commitment to rare disease research with the establishment of the Rare Disease Translational Center. Newly named vice president, Cat Lutz, Ph.D., M.B.A., will lead the way as the Center plays an integral role through the entire rare disease odyssey – from diagnosis to research to drug development.

The Maine Cancer Genomics Initiative, a JAX-led alliance of Maine oncology providers, also expanded by bringing its cornerstone genomic tumor board program to oncologists across the country as part of a national study in collaboration with Columbia University Irving Medical Center and the NCI-funded SWOG Cancer Research Network. The SWOG study allows JAX to expand MCGI’s impact and bring important resources to oncologists — moving beyond Maine into U.S. states such as Hawaii, Ohio and others.

Equally as important as the expansion of JAX research programs is the investment in JAX employees. Addressing the lack of accessible, year-round housing in the region for Maine employees, JAX celebrated the opening of its Hemlock Lane apartments located within walking distance from the Bar Harbor campus. The apartment complex includes 24 units, housing over 40 people, and is managed by The Bar Harbor Housing Authority. 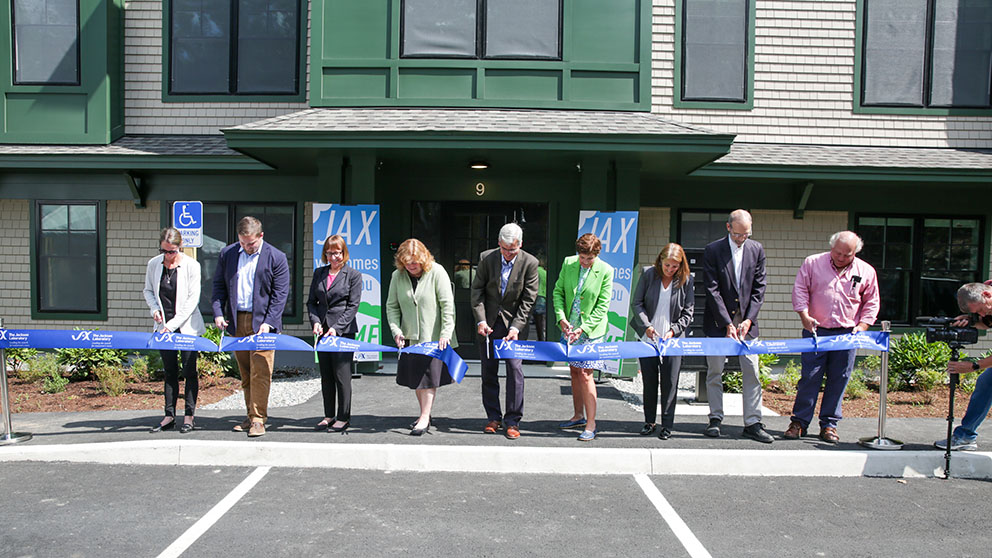 In addition to the grand opening of Hemlock Lane, JAX broke ground on a new on-site child care facility, filling a gap where there is currently a shortage of child care services in Bar Harbor. The center will accommodate more than 50 children when fully staffed and is slated to open in 2024.

JAX Genomic Education offers educational opportunities for a broad range of learners from high school students to clinicians, and from lab technicians to postdoctoral associates. 2022 marked the fifth anniversary of the JAX College Scholarship program which recognizes high school students from underserved backgrounds who are pursuing careers in life sciences and health care. A total of $140,000 in scholarships have been provided to high school students since 2018. JAX Genomic Education also re-launched its Online MicroLessons and MiniCourses in 2022. These self-paced online courses address dozens of topics for graduate students, postdocs, and animal care and laboratory research professionals and now offer optional digital badges to help learners demonstrate knowledge and share their achievements on social media. Since the relaunch, nearly 4,000 learners from 113 countries have generated nearly 10,000 new enrollments.

Finally, this year JAX was proud to celebrate the first anniversary of the acquisition of Charles River Laboratories Japan’s Research Models & Services. The establishment of JAX’s presence in Japan was a critical milestone in further empowering Japanese researchers to make significant scientific advances and improvements in drug discovery and basic research.

JAX welcomed two faculty members to its campuses in Farmington, Conn., and Bar Harbor, Maine. Eric Wang, Ph.D., joined The Jackson Laboratory for Genomic Medicine as assistant professor and will focus on devising new strategies to overcome the development of drug resistance in cancer. Mary Teena Joy, Ph.D., was welcomed to The Jackson Laboratory for Mammalian Genetics as assistant professor and studies the targeting circuits in the brain for repair in neurological diseases such as stroke.

To deepen and enrich connections in the community, JAX supports participation on local and state non-profit boards and commissions. In 2022, three employees were sworn into State of Maine Board positions following nominations by Maine Governor Janet T. Mills and confirmations by the Maine Senate.

In addition to these local board appointments, Peter Robinson was sworn into the National Human Genome Research Institute’s Advisory Council. The Council advises the Department of Health and Human Services, the NIH and NHGRI on genetics and genomics research, as well as training programs.

JAX was also recognized for its mentorship of women and girls pursuing STEM careers as a recipient of the inaugural Stand Up for STEM-Mentorship Award presented by the Connecticut Chapter of Million Women Mentors.

A generous gift from Tucker Taft and his wife Phyllis Yale established The JAX Endowment for Diversity Initiatives, elevating JAX's commitment to diversity, equity and inclusion. The new fund will support diversity initiatives at JAX by providing access to specialized mentorship for trainees from communities and populations that are underrepresented in science, and by helping to create an inclusive culture that embraces and celebrates each person’s unique contribution to JAX’s institutional mission.

JAX Director of Diversity, Equity and Inclusion Moses Davis initiated several new initiatives in 2022 to support a diverse culture at JAX, including Stoveside Chats, a video series where he and employees discuss DEI topics in the kitchen — where ideas, humor and deliciousness can flourish. The series emphasizes the importance of talking about DEI with families and provides employees a comfortable space for learning about the topics discussed. The DEI team at JAX also supported training opportunities, webinars, employee resource groups and events to support a diverse culture at JAX.

From research initiatives and educational programs to recruiting and retaining the brightest minds, support from donors impacts every facet of the work done each day at JAX. In addition to the endowment for diversity initiatives, donors supported JAX in many outstanding ways in 2022: 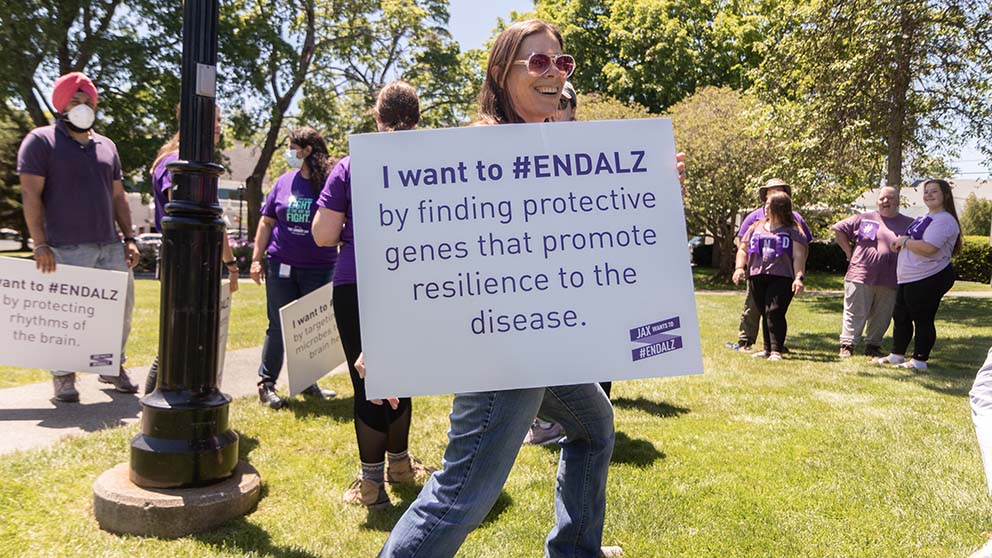 JAX's Catherine Kaczorowski and other JAX staff supporting the Alzheimer’s Association with the #ENDALZ campaign.

Stewards to the community

Stewardship is a key value at JAX, and the organization encourages volunteer opportunities among employees, contributing to the community through meaningful sponsorships and maintaining a sustainable environment across JAX campuses.

In 2022, JAX conducted several waste audits in Bar Harbor, Maine to assess ways to reduce its environmental impact. A food waste/dining audit was conducted over multiple days in the campus cafeteria, resulting in the creation of a food donation program to give away soon-to-expire prepared foods. Free food shelves were then put in place around campus to reduce the amount of perfectly good food sent to be composted, reducing waste and helping to address food insecurity.

In 2021, JAX implemented a new benefit, giving employees 16 hours of time off to use for volunteering with non-profit organizations in our communities. In 2022, 271 employees used a total of 1,927 hours of volunteer time off to help organizations including local child care centers and churches, food pantries, homeless shelters, Yosemite National Park, the Alzheimer’s Association, the Red Sox Foundation, America’s VetDogs and many more.

Through a thoughtful review process, JAX supports causes associated most closely with our research and education mission, or that contribute significantly to the quality of life for our employees. In 2022, JAX supported ~30 organizations with over $280,000; organizations and initiatives such as the Connecticut Science Center, Wabanaki Public Health and Wellness, the Sacramento Police Foundation, the Alzheimer’s Association and many more.

Jeff Chuang has summarized the power of 3D cell models and mapped out the key milestones required for implementation of these powerful tools.