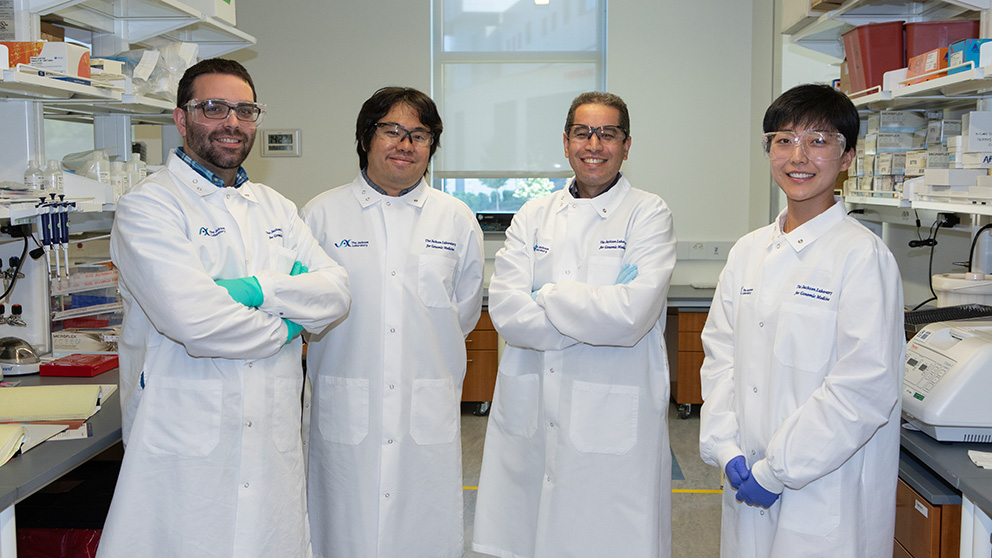 Albert Cheng, Ph.D. was recently honored as one of the Hartford Business Journal’s 40 under Forty. The annual program recognizes Hartford County’s up and coming leaders across multiple disciplines.

As assistant professor and principal investigator, Cheng leads his own team, to develop technologies – which are distributed around the world – to improve precise genome editing and accelerate genomic discovery.

Cheng was inspired at a young age by the science he saw in movies like “Jurassic Park.” Using this science fiction inspiration, Cheng jumped right into bench research during his undergraduate education at Hong Kong University of Science and Technology. After completing his Ph.D. at the Massachusetts Institute of Technology in 2014, Cheng worked as a postdoctoral associate at The Jackson Laboratory in Bar Harbor, Maine. There he was named a JAX Scholar, a prestigious, highly competitive program that supports early career biomedical researchers.

After just one year as a postdoctoral associate in Bar Harbor, Cheng was offered a position on the faculty at The Jackson Laboratory for Genomic Medicine (JGM) campus in Farmington, Connecticut – the youngest person to ever hold a faculty position at the esteemed biomedical research institution.

Cheng is a leader in the innovative and relatively new field of genome engineering, and his work has the potential to make entire areas of research feasible that were previously impossible. This work includes the invention of two very important technologies to the research community - Casilio™ and split selectable markers.

Casilio™ expands the capabilities of the well-known gene editing platform CRISPR-Cas9. CRISPR-Cas9 was developed less than a decade ago, is moving into early-stage clinical trials and is already a heavily used research tool for academic labs. However, CRISPR-Cas9 has limitations in that it can only perform a single function at a time, and that is usually cutting out a segment of DNA.

Casilio™ can simultaneously execute distinct functions in multiple areas of the genome at the same time, such as adding methyl groups to DNA which can alter functions including the cellular production of proteins. This enhanced functionality greatly expands a researcher’s ability to study gene function and chromosome structure. For example, many common and difficult-to-cure diseases like cancer, diabetes and neurological disorders involve many genes. When researchers work with gene networks, it is crucial to have the abilityto manipulate multiple genes within a network or pathway at the same time. Casilio™ allows researchers to do just that.

“Think of Casilio™ like your own smart phone. New functionalities can be added as modules, like installing a food delivery service app or game on your phone.” Cheng says, “I’m really proud to open up these new doors for research into complex human diseases.”

Casilio™ has received issued patents from countries around the world including Australia, Japan and South Korea.

Cheng’s team has also developed a technology called split selectable markers. This tool makes selecting cells that successfully incorporate multiple transgenes—genes transferred from one organism to another, such as human genes put into mouse cells—far more efficient.the  For this efficiency, Cheng’s invention – which scientists have needed for decades – is heavily requested by scientists around the world for a wide variety of research projects that require the expression of multiple transgenes in cellular systems. It saves significant time by making what used to  require five different week-long experiments into a single one-week experiment.

Cheng has been cited in many publications and top tier research journals, and in 2018 was awarded a five-year $3.2 million grant from the National Human Genome Research Institute for epigenetic studies to advance precision medicine. With this recognition, Cheng is advancing his goal to truly benefit the field of functional genomics and provide new tools for powering personalized and precision medicine.

The 40 Under Forty Awards recognize outstanding young professionals in the Greater Hartford area that are excelling in their industries through their leadership roles. They are driven by success, motivated by challenges and are role models for their peers.