Munnamalai considers herself a bit like Sherlock Holmes, the fictional detective created by British author Sir Arthur Conan Doyle known for his keen observation and power of deduction. “Sherlock Holmes takes on only the toughest cases and throws away the boring ones,” she says. “I’m interested in patterns and complex questions in the inner ear, so it’s hard not to draw the parallel.”

I’m interested in patterns and complex questions in the inner ear, so it’s hard not to draw the parallel.

Munnamalai, who joined JAX last year after completing her postdoctoral studies at Purdue University, investigates the development of the mammalian inner ear. Specifically, she explores the signaling pathways that instruct progenitor cells to become specific types of cells in the cochlea and how the patterning, or organization, of those cells is required for auditory function.

Her recent review on signal patterns essential for the development of the cochlea, will be included in Developmental Dynamics’ special issue celebrating the 50th anniversary of the concept of positional information, which dovetails with her research. Positional information refers to the instructions interpreted by cells to determine their identity—the process by which stem cells become mature cells with specialized functions—relative to their position in an organ.

The part of the inner ear that looks like a snail, the cochlea receives sound in the form of vibrations, which cause tiny bundles on hair cells to move and transmits nerve impulses that are sent to the brain to be interpreted as sounds.

“I study cochlear development in mice,” says Munnamalai, “because once the sensory cells in the cochlea become diseased, damaged, or die, they can’t regenerate, which results in hearing loss. What I’m interested in is how these cells [in the cochlea] got there in the first place. What programs and signals are required for them to become a hair cell or a non-hair cell? And how do these pathways aid in establishing the symmetry of the organ?”

These hair cells—inner hair cells (IHCs) and outer hair cells (OHCs)—in the mammalian cochlea are anatomically and functionally distinct. IHCs orchestrate the signaling cascade that converts vibrations into electrical impulses that are sent to the brain to be interpreted as sound, while OHCs, more numerous in number, amplify the sensitivity of IHCs. There are roughly 3,500 IHCs in one row and 12,000 OHCs in three rows in the human cochlea.

These sensory hair cells harbor specialized motion sensors, called stereocilia, on their surface, which are arranged in bundles in a step-wise fashion, with the smallest at one end and the tallest at the other. This graded organization is essential for their motion-sensing ability. A recent study by JAX assistant professor Basile Tarchini, Ph.D., discovered two proteins that play a key role in the architecture of stereocilia. Stunted stereocilia that lack this graded architecture can lead to severe hearing deficits. 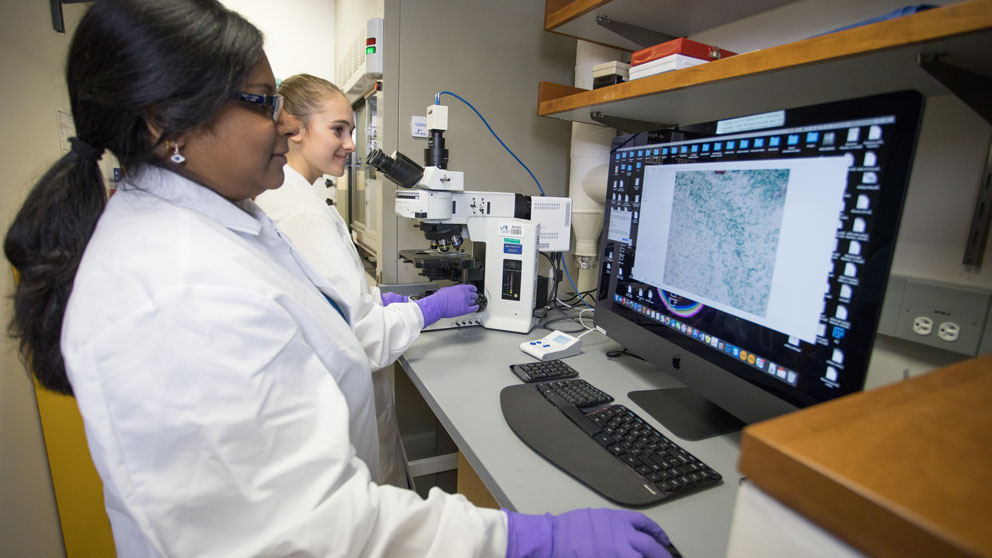 Knowing what goes right in the developing cochlea

Munnamalai says she “fell” into studying auditory development. As a postdoctoral fellow at the University of Washington, she was initially interested in the eye. She interviewed with a well-known eye researcher whose wife worked on the inner ear, so, she says, she “kind of wandered in that direction.” Munnamalai ended up working for the noted inner ear specialist Olivia Bermingham-McDonogh, Ph.D., whose research involves the organ of Corti, a sensitive element of the cochlea that serves as a receptor organ for hearing. Munnamalai became interested in the chemical signals that push early cells to grow into specialized hair cells.

A person’s hearing can be affected if these signals are somehow crossed, there are too many of one type of cell, or the cells are in the wrong location, but “before we can know what goes wrong with hearing, we have to know what goes right.”

To answer that question as a postdoctoral research associate at Purdue University’s Institute for Integrative Neuroscience, she and her mentor, Donna Fekete, Ph.D., focused on cell fate specification and sensory cell differentiation in the cochlea.

In a 2016 study published in the journal Development, Munnamalai and Fekete dissected and examined an impressive number of 496 embryonic cochleas to investigate the signaling pathways that drive progenitor cells to become either IHCs or OHCs and the precise arrangement of these cells within the organ of Corti. While a number of pathways are involved in auditory development, their study focused on Wnt, which is responsible for IHC development, and Bmp, which governs the growth and development of OHCs. These pathways interact with another signaling pathway called Notch, which plays a major role in embryonic development and gene regulatory mechanisms that control multiple differentiation processes during embryonic life.

Wnt proteins regulate cell proliferation, initially during early development and then later during the growth and maintenance of many tissue types. Bmp proteins play a critical role in embryo formation and development. Studies have shown that Wnt and Notch regulate the formation of sensory hair cells and that modulating their activity might be a way to regenerate damaged hair cells in the human cochlea.

Munnamalai and Fekete’s study showed that Wnt signaling influences the patterning of IHCs and OHCs through crosstalk—connections between proteins in a signaling pathway—with Notch and Bmp at several stages of embryonic development. Their findings help to explain how the Wnt pathway might also regulate sensory cell fate decisions within the cochlea.

In her recently accepted paper for Developmental Dynamics, Munnamalai and her colleagues link these signaling pathways to associated downstream genes that create gene regulatory networks (GRNs) that help with patterning in the cochlea. GRNs are a collection of molecular regulators that interact with one another to help create structures in the body. GRNs and their connections to these signaling pathways may hold clues to how to repair a damaged cochlea, either with drugs or genetic therapeutic approaches.

Laying the groundwork for restoring hearing

In her prior studies, Munnamalai‘s diverse research background also includes studying including C. elegans (worm), A. californica (sea slug), and G. gallus (chicken). At JAX, she is using more sophisticated mouse models whose genetic and biological characteristics more closely resemble those of humans. Her current research is investigating the cellular organization of the cochlea and examining how the Wnt and Bmp pathways, which behave antagonistically, help immature progenitor cells become specialized IHCs and OHCs.

By studying the complex issues surrounding cochlear development, Munnamalai’s findings may have implications for hearing loss, especially in terms of the regeneration of hair cells. Extensive research has shown that bird and fish auditory hair cells can regenerate, which might lead scientists to identify ways to restore damaged hair cells in the human cochlea. Munnamalai says that stem cell organoids are a great way to screen for pharmaceutics. She hopes that by gaining a greater understanding of how hair cells grow in cochlea in the normal cochlea, she will learn how to coax immature progenitors to become healthy IHCs and OHCs, a critical step in restoring damaged hearing.

"I want to push research toward stem cells that can differentiate into certain cells or to develop a cochlea in a dish,” she says. “This would be fantastic for drug screening or developing molecules to protect the cochlea."