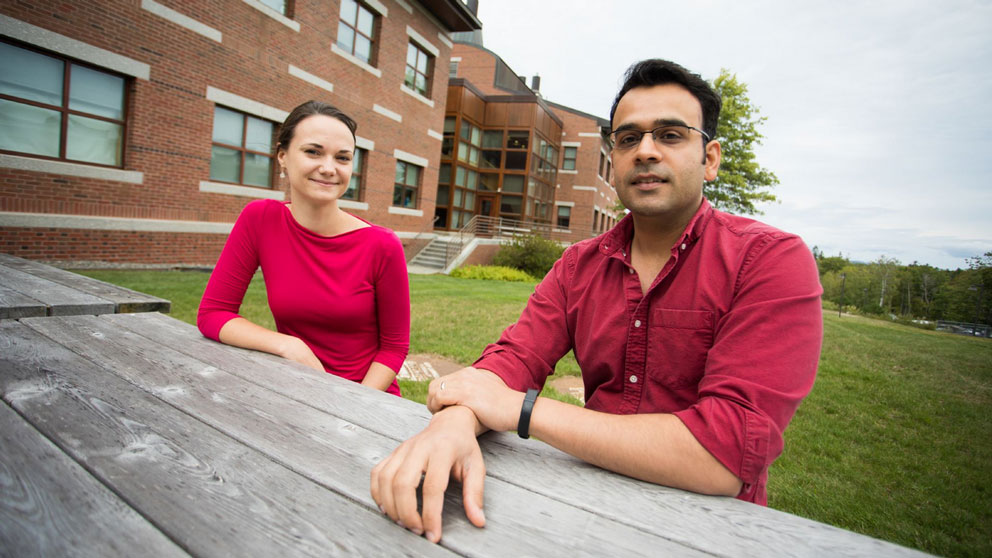 The Jackson Laboratory recently awarded the prestigious  JAX Postdoctoral ScholarsThe JAX Scholar award offers exceptional early-career scientists the opportunity to develop their independent research program at The Jackson Laboratory in preparation for the next step in their scientific career.JAX Scholar Award to two postdoctoral associates, Amy Dunn, Ph.D.Gene-environment interactions in aging, Alzheimer's disease, and related disordersAmy Dunn, Ph.D. , and Raghav Pandey, Ph.D.Cardiovascular research focused on metabolic changes that can be altered to prevent disease onset.Raghav Pandey, Ph.D. The JAX Scholar Award, awarded annually since 2014, supports early-career scientists conducting research at one of JAX’s research campuses, in Bar Harbor, Maine, and Farmington, Conn. Dunn and Pandey both study prevalent diseases of particular importance to an aging population:  Stopping Alzheimer's disease before it erases memories, personalities and lives?Yes, it's possible. Using genomic technologies and specialized mouse models to develop preventative therapies, JAX scientists aim to stop Alzheimer’s before it starts.Alzheimer’s disease and congenital  Finding new ways to prevent and repair damage to the heartJAX researchers are exploring the genes associated with an increased risk for cardiovascular disease and seeking new ways to prevent and repair heart damage.heart disease .

“Amy and Raghav are exceptional examples among JAX’s postdocs,” said  Kenneth Fasman, Ph.D.A leader in scientific collaborative research management, Dr. Fasman directed drug development strategy and performance at Astra Zeneca and served as chief scientific offer at the Adelson Medical Research Foundation prior to joining JAX in 2015.Ken Fasman, Ph.D. , Senior Vice President for Research and chair of the JAX Scholar selection committee. “We look forward to seeing their progress in the years to come – in their research and in their careers generally. As JAX Scholars, they join a community of outstanding scientists who have trained at the Laboratory.”

Dunn’s research, with JAX scientists Catherine Kaczorowski, Ph.D.Identify early causative events that underlie cognitive deficits associated with ‘normal’ aging and Alzheimer’s diseaseCatherine Kaczorowski, Ph.D. , and  Kristen O'Connell, Ph.D.Kristen O’Connell’s research program is focused on understanding the impact of diet, body weight and peripheral hormone signaling on neuronal excitability and plasticity in the hypothalamus and other brain regions associated with the regulation of food intake and body weight.Kristen O’Connell, Ph.D. , aims to understand how our genetics intersects with environmental factors to determine susceptibility to Alzheimer’s disease. Susceptibility to Alzheimer’s disease – like many diseases – is influenced strongly by our genetics: if you have a parent or sibling with the disease, you’re at greater risk of getting the disease than someone who doesn’t. But genetics don’t explain everything. Environmental risk factors contribute, too. Those environmental risk factors for Alzheimer’s disease vary, ranging from head injuries to blood pressure.

As JAX Scholars, they join a community of outstanding scientists who have trained at the Laboratory.

Dunn focuses on differences in susceptibility to Alzheimer’s disease between individuals consuming a high-fat, high-sugar diet compared to those on a healthier diet. Her research uses a genetically diverse collection of mice, letting her test the influence of both genetic variability and diet – the complex combinations that are present in the human population. “With this study, we are evaluating why environmental risk factors like a poor diet have different effects across the population,” explained Dunn. “If we can identify molecular targets or pathways that are involved in mediating the effects of diet on cognitive health, we may reveal new targets for Alzheimer’s therapeutics. It will help us identify which people may benefit from such a therapeutic or dietary intervention.” Dunn’s work is supported by an Alzheimer’s Association Research Fellowship, which she was awarded earlier in 2018.

Pandey’s research, carried out in the lab of JAX Scientific Director Nadia Rosenthal, Ph.D., F.Med.SciInvestigates the role of genetic variation and the immune system in tissue repair, focusing on cardiovascular and skeletal muscle diseaseNadia Rosenthal, Ph.D., F.Med.Sci. , focuses on adult congenital heart disease, caused by a group of developmental defects that result in heart malformations and thus disrupt normal heart function. “One million kids are born with congenital heart disease each year. Patients suffer from conduction defects, atrial septal defects, and dilated cardiomyopathy,” described Pandey. As treatments improve, many survive to adulthood. Now, 2 – 3 million US adults are estimated to be living with congenital heart disease and are thus at risk for heart failure without the appropriate care and treatment.

Pandey’s work focuses on a particular mutation that leads to defects in heart development, using a mouse model that captures the key features of human patients with this form of congenital heart disease. Pandey wants to define how diet, metabolism, and age affect the severity of the disease. “We have shown that a high-fat diet acts as a double insult,” said Pandey. “These mice fed a high-fat diet develop heart dysfunction in 30 weeks – still young adulthood for a mouse.” Pandey has also identified existing diabetes drugs that might benefit patients. He continues to test the drug’s efficacy in the heart disease model and hopes to uncover additional therapeutic approaches.

Both Dunn and Pandey cite the opportunities for collaboration as key assets of conducting their research at JAX. “It’s easy to collaborate with other PIs,” said Pandey. “This is great training,” added Dunn, “because I have been learning not only technical skills in the lab, but other skills like how to establish, navigate, and manage collaborations, and diverse ways to approach scientific questions.”

JAX Scholars Award recognizes postdoctoral associates at The Jackson Laboratory who, based on prior research accomplishments, plans for future research, and their leadership roles, demonstrate strong potential to be influential scientists – both in the research community and in society. The JAX Scholar Award supports these early-career researchers as they develop their research program and gain the experience that will help them take the next step in their independent scientific careers. The award provides salary support as well as a research budget.

Postbacc, Ph.D., and Postdoctoral ProgramsExceptional opportunities for PhD and postdoctoral research and training in a unique scientific environment.pre-and-postdoctoral-program

“Having the JAX Scholar award is exciting, especially because it provides funding for me to start developing a more independent research project even at this relatively early stage of my postdoctoral career,” said Dunn. “The JAX Scholar Award’s discretionary budget allows us to generate data that could help establish us as independent researchers and gain skills that will make us more holistic scientists,” added Pandey.

“It allows for a little more flexibility to pursue other interests outside of the lab, like scientific outreach in the community and strengthening my teaching, mentoring and other ‘soft skills’ that are not always part of a typical postdoc,” continued Dunn. “I think this award will really support me becoming a better, more well-rounded and independent scientist.”