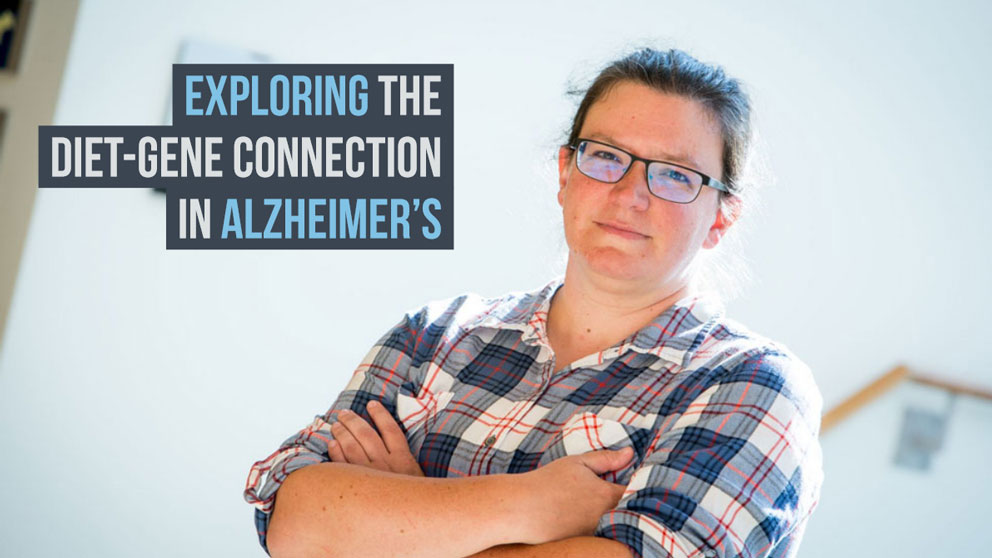 Loss of memory, learning and other brain functions is the most prominent and devastating symptom of Alzheimer’s disease, so it’s not surprising that most research focuses on the parts of the brain related to learning and memory, such as the hippocampus.

But many Alzheimer's disease patients also show another characteristic: weight loss as early as 17 years before the onset of their memory loss and cognitive decline. Is this merely a coincidence, or could a poorly functioning hypothalamus (the brain region that controls appetite and weight control among many other processes) have a causative role in Alzheimer's disease?

A new five-year grant totaling $3,833,547 from the National Institute on Aging will fund studies of the role of hypothalamic dysfunction in Alzheimer's disease by Jackson Laboratory (JAX) Assistant Professor  Kristen O'Connell, Ph.D.Kristen O’Connell’s research program is focused on understanding the impact of diet, body weight and peripheral hormone signaling on neuronal excitability and plasticity in the hypothalamus and other brain regions associated with the regulation of food intake and body weight.Kristen O’Connell, Ph.D., and Catherine Kaczorowski, Ph.D.Identify early causative events that underlie cognitive deficits associated with ‘normal’ aging and Alzheimer’s diseaseCatherine Kaczorowski, Ph.D., JAX associate professor and Evnin Family Chair in Alzheimer’s Research.

“We propose that hypothalamic dysfunction during the preclinical stage of Alzheimer's disease is an early causative step in a cascade of events culminating in dementia,” O’Connell says.

Using genetically diverse Alzheimer's mice that better model the complex factors contributing to the disease in humans, O’Connell and Kaczorowski will hunt for and evaluate genetic variants and networks that contribute to variations in body weight associated with cognitive decline, and other variants that control individuals’ susceptibility to a high-fat diet.

Their studies could provide new insight into how modifiable environmental factors (such as diet) influence risk of Alzheimer's disease, and could identify new biomarkers and therapeutic strategies targeting the very earliest preclinical stages of the disease, to delay or even prevent Alzheimer's disease.