Under pressure: protecting neurons from glaucoma 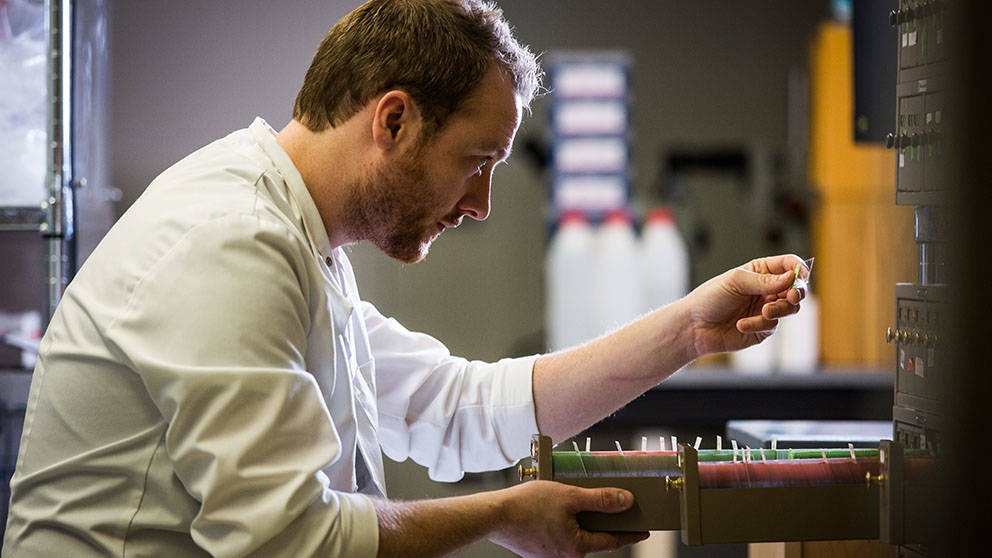 Pete Williams, Ph.D., is researching how to protect the optic nerve from changes in intraocular pressure caused by glaucoma, which would offer hope to patients suffering from gradual, irreversible vision loss.

There is no cure for glaucoma. The damage is irreversible.

“People say, ‘Oh, my grandfather has glaucoma and he takes eye drops,’ and they think it’s cured. But there is no cure for glaucoma,” explained Williams, a postdoctoral associate at The Jackson Laboratory. “The damage is irreversible.”

As the optic nerve passes out of the eye, its individual fibers — axons — run through a meshwork made out of semi-flexible fibers. Normally, when the meshwork isn’t under stress, the axons pass cleanly through the meshwork’s pores. But pressure, such as the increased ocular pressure that is a hallmark feature of glaucoma, bows the meshwork, causing the pores to deform and pinch the axons within the optic nerve.

“Eye pressure is one factor that can lead to damage of the optic nerve but it’s not the only thing,” explained Williams. “There are genetic, environmental, and dietary factors. African-Americans and Hispanics are at a much higher risk for glaucoma than the rest of the population.”

But all forms of glaucoma share the same prognosis: gradual irreversible vision loss.

“Once the neuron is damaged, it’s impossible to repair,” Williams says.

Williams wants to change that. He works in the laboratory of Professor Simon John, a world leader in glaucoma research. Williams is focused on identifying the genetic processes that contribute to optic nerve degeneration.

There has been a long-standing puzzle in the field: why do glaucoma patients with normal eye pressure — either through medication or naturally — still experience gradual degeneration of the optic nerve? This fact suggests that there are other things going wrong in the neuron that contribute to its demise.

Williams is using a mouse strain that recapitulates the increased eye pressure and optic nerve damage seen in human patients. He’s looking for the earliest signs of damage in the neurons – changes that occur after eye pressure increases but before vision is lost.

“I want to figure out how to protect the neurons,” said Williams. His recent work goes in that direction. He’s identifying the genes that show changes in expression in the glaucoma-affected mice compared to their unaffected counterparts. Next, Williams will test which ones affect the symptoms. By disrupting those genes that are early contributors to the disease, Williams intends to prevent nerve degeneration.

Williams came across a surprisingly simple intervention based on the genes turned on in the mice that would eventually develop glaucoma. The list of genes contained many members of a particular metabolic process, suggesting to Williams that certain B vitamins and metabolites might be involved. He tested whether a simple dietary supplement could defend the nerves against glaucoma-associated damage, and so far, the results are encouraging. Williams is expanding this approach to include gene therapies that target the same metabolic pathways, exploring whether a single treatment could protect the optic nerve. He is collaborating with clinicians to see if his discoveries can help human patients.

Williams’s scientific career has been devoted to understanding neurodegenerative diseases that cause loss of sight. Before coming to JAX, he studied at Cardiff University in Wales, where he worked with professors James Morgan and Marcela Votruba. Williams discovered why neurons don’t function in a mouse model of a fairly common form of inherited vision loss called dominant optic atrophy. About one in every 30,000 children carries the disease, but it receives little attention. Williams became interested in visual disorders because he was interested in the senses – how we see, hear, touch, taste, and smell. Cardiff’s School of Optometry and Vision Sciences had the best microscopes and a brand new building, which provided Williams with the resources he wanted to fulfill his ambitions in the laboratory. And Morgan and Votruba provided mentorship, support, and the freedom to explore.

“When I was younger, no matter how hard I worked, there was a cap to what I could achieve. But with research, the more I put in, the more I got out. I did more experiments and I got more results. It just took time. And at that point in my life, I had plenty of time,” recalled Williams. As a Ph.D. student in Cardiff, Williams discovered the cause of neural dysfunction in dominant optic atrophy. He also contributed to a number of other projects, ranging from Alzheimer’s disease to glaucoma to magnetic manipulations of cells.

“Working hard meant more good things came.” He completed his Ph.D. in a remarkably short two and a half years.

During his Ph.D., Williams had the chance to visit the John laboratory at JAX for a collaborative project. He liked the research and the scientific environment.

I love the outdoors, so it wasn’t hard to see myself here.

“I love the outdoors, so it wasn’t hard to see myself here,” Williams said about JAX’s location at the edge of Acadia National Park. This first visit later led to an interview for a postdoctoral position. “It was a four-day interview in November. The first day was a climbing trip with Simon John and a few other people from JAX. I didn’t know what Bar Harbor weather was like, so I showed up in a T-shirt and shorts. It was 20 degrees.”

But he did the climb — Sea Gypsy on Precipice’s South Wall — and spent the remaining three days discussing science with John and other members of JAX’s research community. John invited Williams to join his research group in 2012.

Williams’s decision to accept the offer was driven by the resources, expertise, and colleagues that John’s lab offered.

“It’s the only lab in which I could do these experiments,” explained Williams. “Simon’s lab excels at the type of work I wanted to do. And Simon and I were excited about the same questions. I knew he would be a great mentor.”

Now Williams is starting to plan his future research goals.

“I’m really interested in using this general approach to understand and prevent other age-related neurodegenerative diseases, as well as finding out what keeps neuronal cells healthy.”

The National Eye Institute has made a four-year grant totaling $2,144,828 for continued funding for The Jackson…