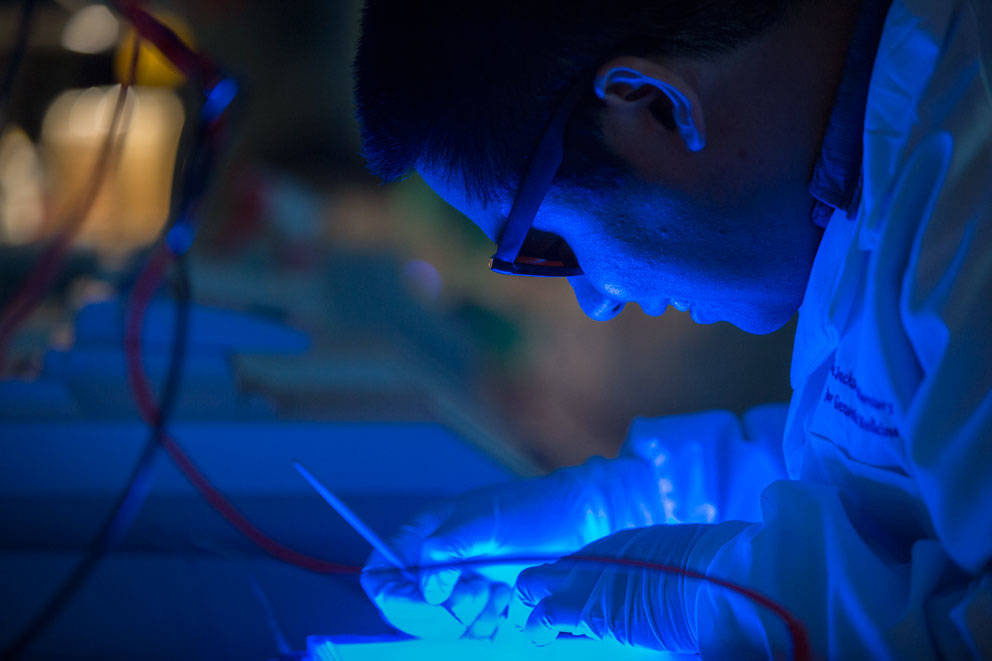 When , was growing up, science fiction was a big thing on the big screen. The movies depicted things both large (“Jurassic Park”) and small (“Outbreak”) designed to thrill and scare audiences. Cheng’s response was somewhat unusual, however, and foreshadowed his future in research.

“In the movies I think that it’s very exciting to see people work together as a team to solve problems or create something beautiful,” says Cheng, now an assistant professor at The Jackson Laboratory (JAX) in Connecticut. “If I were a science fiction character, I’d like to be Tony Stark — Iron Man — who doesn’t have a superpower but solves his problems through science and engineering.”

I hope what we do will have an impact for patients, that it will improve human health.

Cheng’s science and engineering marvels aren’t as showy as a flying metal suit, but they are remarkable nonetheless. He is a leader in the relatively new field of genome engineering and works to develop improved ways to edit genomes, manipulate function and activity within the genome, and engineer artificial proteins for binding DNA and RNA. In a nutshell, his work has the potential to make feasible entire areas of research that were previously impossible. The difficulties he faces are profound. Precisely and reliably tweaking something as immense, complicated and seemingly chaotic as a genome takes ingenuity and patience. But it’s this sort of challenge that appeals to Cheng the most.

“What drives me now is figuring out how to make things work,” says Cheng. “If we spend a lot of time and effort to build something and it fails, I keep thinking about new ways we might find a solution. I get so wrapped up in it and excited about it sometimes that I have trouble getting to sleep.”

Encouraged by teachers from a young age to explore science and participate in projects and competitions, Cheng entered Hong Kong University of Science and Technology well prepared to jump right into bench research. And that’s what he was able to do.

“I would say I have been lucky to have very good science teachers all the way through my education,” says Cheng. “My secondary school STEM teachers were very inspiring, and they encouraged me to participate in science/engineering competitions. My university professors gave me the chance to just go into the lab and do research right away as a freshman, which definitely kept me interested in science. I’ve had that kind of encouragement and support along the way through getting my Ph.D. and then coming to JAX.”

Cheng moved from Hong Kong in 2007 to pursue his Ph.D. in computational and systems biology at the Massachusetts Institute of Technology in the labs of Christopher Burge and Rudolf Jaenisch. Their influences are apparent in Cheng’s current program. Burge studies gene expression and regulation, identifying genes in genomic sequences and investigating how messenger RNA builds itself into a mirror image of the DNA “template” before manufacturing proteins. Small changes in RNA processing can have profound effects on the proteins that are eventually produced. Jaenisch also studies gene regulation, but in different ways. His research has led to new understanding of stem cells which can be created from mature cells. Jaenisch was an early innovator with the CRISPR genome editing technology as well, applying it in new ways to accelerate research in his lab.

As Cheng was finishing his doctorate, a friend of his in Jaenisch’s lab, Haoyi Wang, Ph.D., a postdoctoral associate, was recruited to join the JAX faculty in Bar Harbor. Cheng was already aware of JAX for mouse genetics and the Courses and Conferences program, and he was interested in continuing to work with Wang.

“We were like ‘How about we just work together at JAX?’ so I joined Haoyi’s lab as a postdoc,” Cheng recalls. “After I came here, I was amazed by how strong the research program is and how much support JAX provides for researchers. We have centralized services with the latest equipment and technology, grant writing and application support, and administrative support. It’s very complete.”

Cheng was also one of the first to be named a JAX Scholar, a program established for exceptional postdoctoral associates. JAX Scholars are expected to work with greater independence than usual and to pursue independent funding under the mentorship of faculty. Once again, Cheng embraced his opportunity and followed through with excellent work, becoming a productive and integral part of the Wang lab.

“Albert is one of the most inspiring people I have had the pleasure to meet and work with,” says Wang. “More importantly, he is such a smart, kind and fun person that we became really good friends through collaborating and just simply hanging out together. We want our friendship and scientific collaboration to be lifelong, and for our work to contribute to the improvement of human health.”

When JAX started building out its new facility in Connecticut for what is now The Jackson Laboratory for Genomic Medicine, Cheng was perfectly positioned for yet another leap forward.

“When JAX launched its genomic medicine campus, I was so excited,” says Cheng. “I decided to apply to join the faculty there, and luckily I was accepted. I’m very happy to be starting my own research here as an independent principal investigator.”

For Cheng, becoming independent didn’t mean becoming isolated, and he has continued to collaborate with Wang after setting up his laboratory at JAX. A project he set his sights on early was to take some of the key attributes of CRISPR/Cas — targeting very specific places in the genome and being able to bind to the DNA sequence there — and make the system more versatile. Initially, the only function was to cut the DNA at the targeted place and perhaps insert a different sequence (known as genome editing), but Cheng and Wang figured out how to make the CRISPR/Cas system perform many more tasks. And they made it so that different tasks can be carried out in the genome at the same time. The system, named Casilio, promises to be a very powerful tool for researchers and allow them to perform experiments that were previously impossible to do.

Cheng’s research and the tools he develops are highly technical and not specific to any particular disease, but he always keeps in mind the larger goals for them.

“I hope what we do will have an impact for patients, that it will improve human health,” he says. “One thing our tools can do is to help other scientists look at processes that are not possible with existing methods and allow them to take new approaches to help understand disease. We also hope we can further develop these tools to provide new therapeutic opportunities and improve diagnostic technologies.”

The quiet, painstaking work Cheng does is not the stuff of comic books. But, if one thinks about it for a minute, his impact on the human condition might be more profound than that of your average superhero. Developing the tools needed to understand — really understand — our own biology and how it works in health and disease provides a way to profoundly affect medicine and our ability to not only treat disease, but to avoid it whenever possible. And that’s just about the happiest ending possible.

“Doing this work, step by step, sometimes you think it’s impossible to make it work,” says Cheng. “But at the end, when it actually does work, I think that’s the most rewarding part.”