Few people think more about mouse behavior than Jackson Laboratory Associate Professor Elissa Chesler, Ph.D. Maybe even fewer people have, like Chesler, decorated their homes with the World War II fighter aircraft and space shuttles they built from tiny interlocking plastic building blocks. So it’s not surprising that Chesler thought up a unique assignment for her summer intern: build an operant conditioning chamber to test mouse behavior, and build it from bright-colored LEGO® bricks.

Chesler studies addiction behaviors. She and her team also develop technological tools for understanding the self-destructive and antisocial behaviors associated with alcohol and drug dependence and other forms of addiction.

“We know that laboratory mice manifest behaviors that resemble attributes of addiction disorders,” she says. “And different mouse strains, which have different genetic backgrounds, show different behaviors. These include preference for alcohol and how quickly they acquire a reward behavior.”

After years of exploring the biology of addiction, Chesler became convinced that it might hold the key to a new approach to helping young people avoid the dangerous pitfalls of drug and alcohol abuse.

“A lot of education around substance abuse is about preventing that first use of drugs or alcohol,” she says. “That mainly involves explaining to students what the drugs’ effects are, and encouraging behaviors that help them to decline that first drink or cigarette or drug — the ‘Just Say No’ approach.”

“But the fact of the matter is that many, many adolescents use drugs anyway. And what we want to teach these students is what it means to be addicted. What is the behavior process of reinforcement learning, compulsive behavior, impulse control — what are the behaviors associated with addiction? And how do you recognize early in the process that an addiction is setting in?”

“Prevention is important, but the real core of addiction is this reinforcement behavior, and that’s something we could be bringing to the classroom.”

The classic way to test laboratory mouse behavior is through a conditioning chamber in which an animal receives a reward when it successfully learns a new behavior, such as pressing a lever in response to a light or sound signal. Chesler’s lab uses a sophisticated new version of the chamber, that allows the mouse to self-administer a drug dose and transmits a record of every movement the mouse makes to a computer database for later analysis.

The Jackson Laboratory has an extensive suite of such testing tools in a new neuroscience biometrics suite, thanks to a gift from the Connie B. Rossi Foundation. But the tools are expensive to buy and require a team of experts to operate and maintain and thus, are not feasible for use in a high school or junior high classroom. 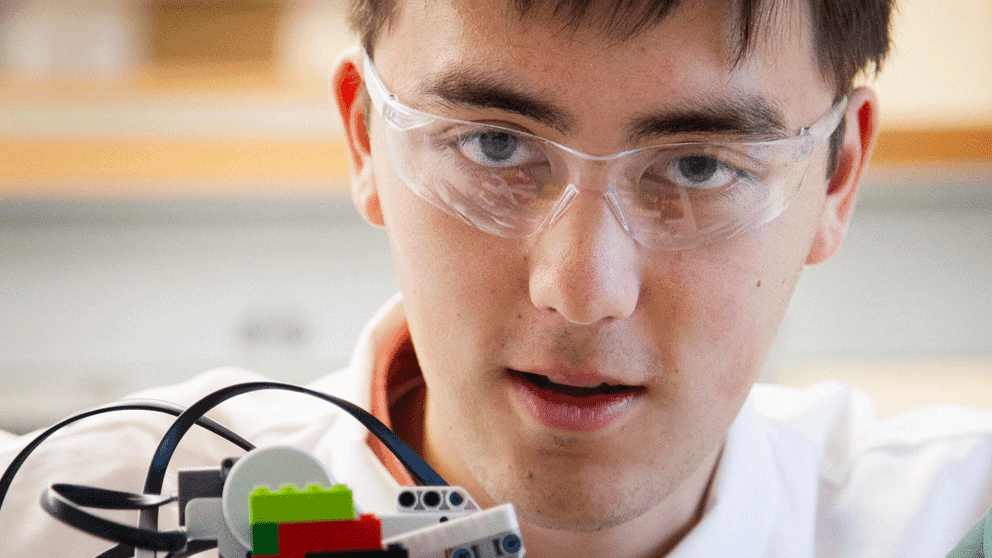 Chesler grew up with them, from the basic rectangular blocks (“you had to use a lot of imagination”) to the Legoland® Space sets to the LEGO® Logo line, programmable components that could be configured to set up science experiments.

“When I first heard about the LEGO® Robotics system,” she recalls, “back when I was setting up my lab and researching a lot of the equipment I would buy, the thought crossed my mind that it might be possible to build some of these complex testing apparati, even the most sophisticated ones, out of LEGO® blocks.”

The opportunity to put this bold idea to the test came in the spring of 2013. Andy Gallup, a student at Mount Desert Island Regional High School, about seven miles from The Jackson Laboratory’s Bar Harbor, Maine, campus, was applying for a slot in the Laboratory’s prestigious Summer Student Program. Gallup is the son of JAX Assistant Professor Kyuson Yun and David Gallup, coach of Bar Harbor’s highly successful student robotics team.

“I knew Andy was on the robotics team,” Chesler says, “and someone had mentioned to me that he was a crack LEGO® programmer and engineer. And so when I met with Andy to discuss what his summer project would be, and asked if he would consider a project involving the LEGO® system, I think his eyes bugged out!”

Gallup says, “I was kind of surprised, and even a little hesitant, because I wasn’t sure what I was getting myself into. But at the same time, hey, it’s LEGO®, so I was also really excited.”

Gallup, already an outstanding science and math student with a year of computer science and a lifetime of LEGO®  under his belt, undertook the challenge of designing, testing and documenting an operant conditioning chamber using only off-the-shelf components.

“The prospect of inventing something new is very exciting,” he says, “but it’s also intimidating, because you’re not sure what you’re doing is right. You could just be wasting your time and resources. But it was really fun working in the Chesler lab. They were very welcoming and they always took time out of their day to help me when I needed it.”

By the end of that summer, Gallup had built his conditioning box, complete with levers that activate miniature catapults that fling a single tiny food pellet into the chamber. It looks like a toy any kid would want to play with and an instrument any scientist would want to use.

Gallup continued working on the project throughout his senior year, testing mice and accumulating data, and into the following summer, writing the software documentation and creating an instruction manual with step-by-step photographs showing how to build and operate the unit.

Chesler says Gallup made even more of the educational experience than she had anticipated.

“I was impressed by how he worked, rapidly working through prototypes and taking many different approaches. He went from mechanical engineering to computer science, biostatistics and behavioral science, and built that all into a well-documented system, and did the mouse testing to validate that his instrument worked.”

Gallup, who is returning to the Chesler lab this summer, will take a gap year before college to explore Nepal, India and other countries, an experience he describes as “incredibly valuable.” In November, Chesler presented Gallup’s poster describing the LEGO® conditioning box at the Society for Neuroscience meeting.

“That poster got a lot of attention,” Chesler says. “Science News wrote an article, and we had interest from instrument vendors, addiction biologists and people who do brain-awareness outreach.”

She hopes to collaborate with educators to bring the project into the classroom. “I know there is increasing pressure on teacher time. But you could envision a short project with high school students collaborating with a university behavioral science lab.” The kids build the device, she explains, and bring it to the lab to do the testing with mice, and the university handles all the safety, animal welfare and other laboratory compliance issues.

“The more I work on this the more I realize the importance of what we’re doing,” Chesler comments. “Behavioral disorders are pervasive, they are phenomenally widespread, and there’s a lot of social stigma associated with having them. We have an area of research that’s becoming increasingly recognized as fundamentally important to human health and the cost of health care.

“I think it’s vitally important for young people to learn basic concepts about the biology of behavior. I hope this project can help promote greater understanding of addiction and other behavioral disorders.”

Andy Gallup: Thinking Outside the Blocks