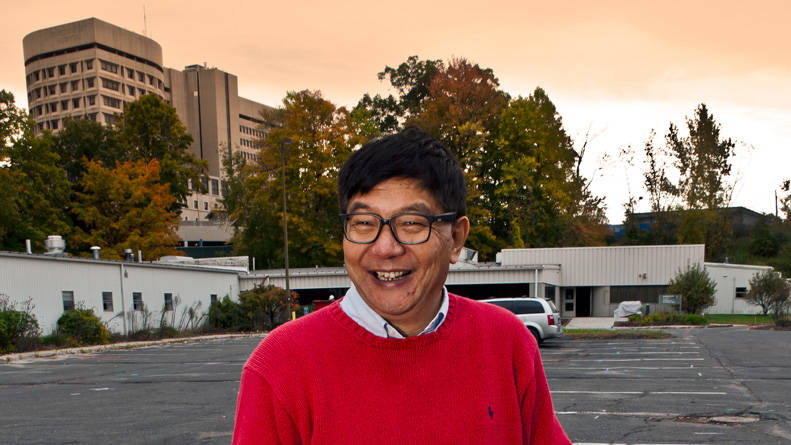 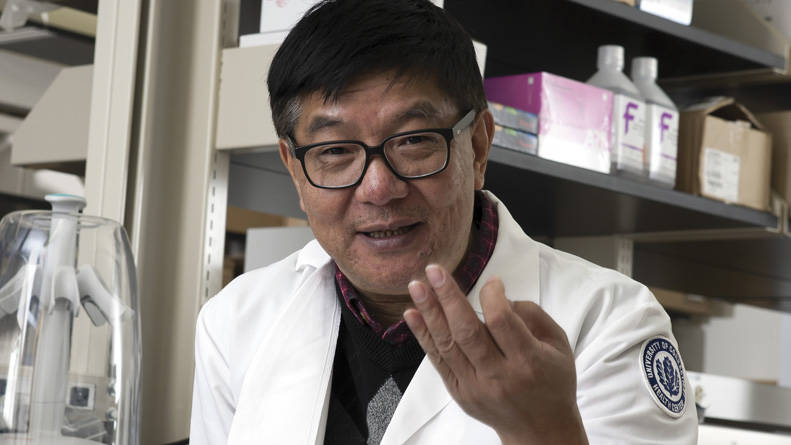 'Yijun Ruan is a huge intellect, but he is also very unassuming and easy to get along with. I could not think of a better collaborator.' —Marc Lalande, Ph.D. 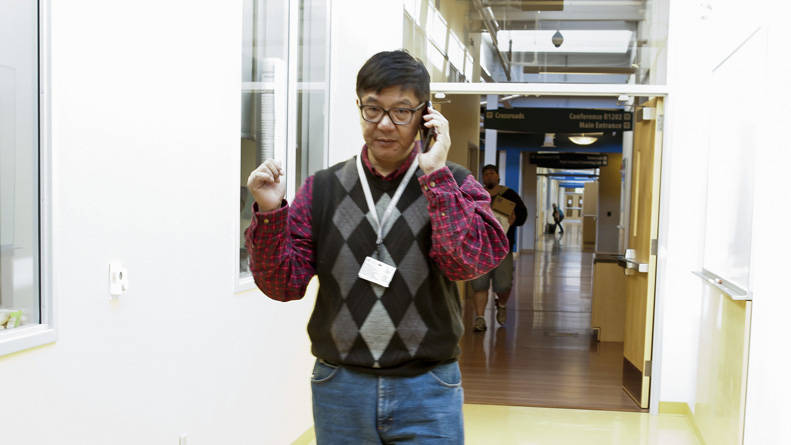 'Yijun Ruan in the hallway outside Jackson Lab's temporary space at the UConn Health Center. 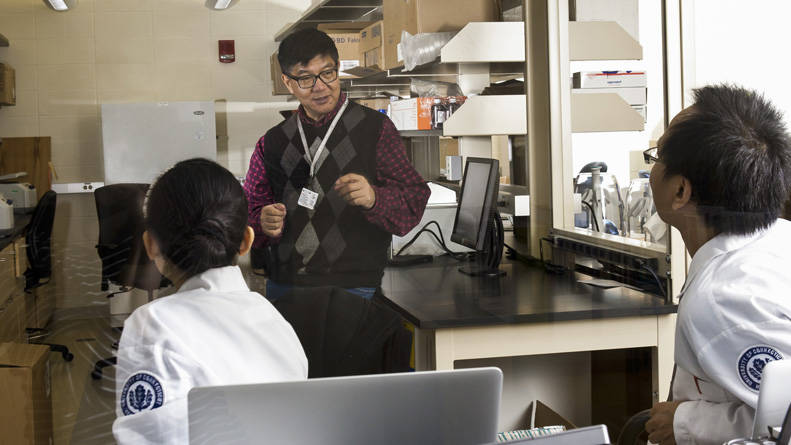 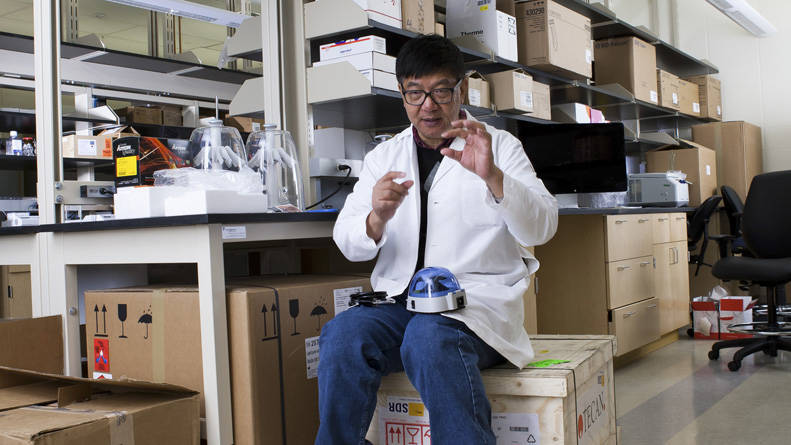 There's lots to do to get up and running in temporary lab space at the UConn Health Center. 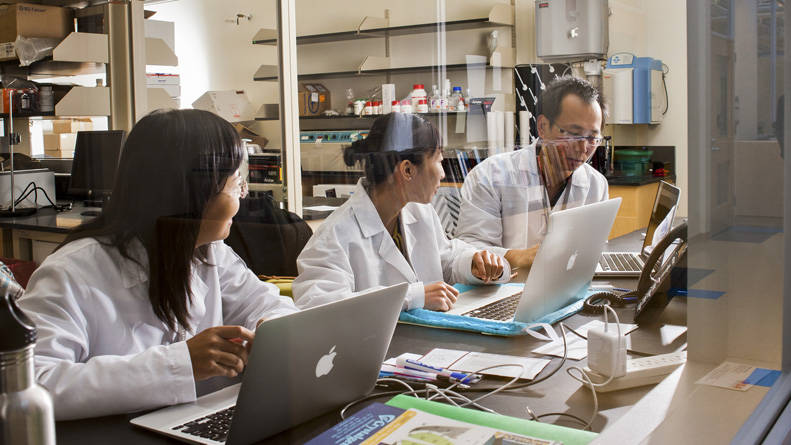 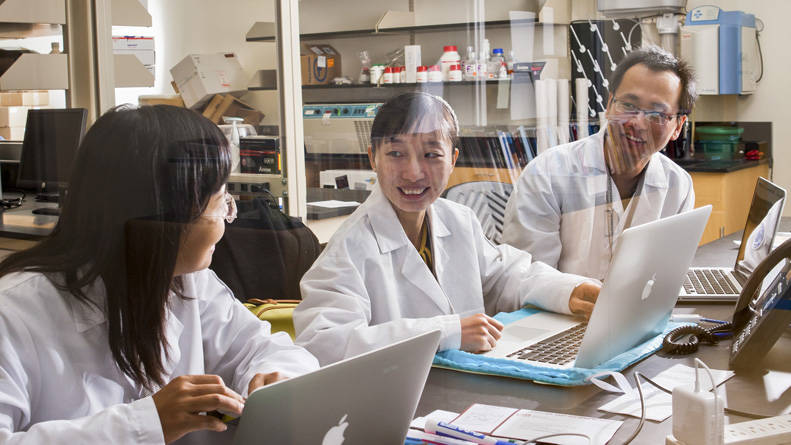 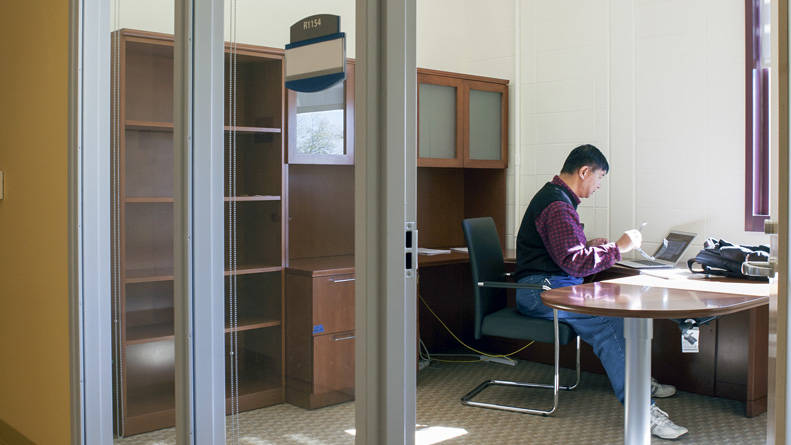 Yijun Ruan in his new office at The Jackson Laboratory for Genomic Medicine at the UCHC campus in Farmington, Conn.

The study of human genomics is like a complicated jigsaw puzzle with billions of interlocking pieces, says Yijun Ruan, Ph.D.

Genomic medicine is the future, and that future is bright.

He is also responsible for ensuring access to the latest genome research tools, such as high-throughput DNA sequencers, which are now capable of sequencing whole human genomes—all 3 billion-plus bases—in little more than a day. He must develop the computing environment as well, particularly the sequence-analysis software needed to make sense of the massive amounts of data produced by the sequencers. Scientists use the technology to understand how complex networks of genes interact to cause disease. Their goal is to provide doctors and patients with individualized, precise solutions to medical problems.

"Yijun Ruan is one of the most creative thinkers in genome technology," says Jackson Laboratory President and CEO Edison T. Liu, M.D., who recruited Ruan from the Genome Institute of Singapore (GIS), where the two had worked together for a decade.

"For us to be a player in genomic research and genomic medicine, there are three components. One is analytical firepower, second is biological understanding and third is the deep capability to maximize the power of genomic technology. We are building analytical strength with new recruits. We already have the biological capability. And Yijun Ruan provides innovation in genomic technology."

Ruan acknowledges the challenges ahead but faces them with enthusiasm and confidence.

"We must come at this from many different angles," he says. "We must develop novel methods for using the latest in genome sequencing and analysis technology. We must draw on basic research, clinical trials and computational expertise. We must reach out to medical professionals who are currently in practice and to medical students preparing to practice. Genomic medicine is the future, and that future is bright."

A fascination with genomics

Ruan, who has been an American citizen since 2002, was born in the Chinese metropolis of Wuhan, a city of about 10 million and the capital of Hubei Province. He completed an undergraduate degree in microbiology in China before coming to the United States for graduate work at the University of Maryland.

"In my childhood, I dreamed of becoming a medical doctor," Ruan says. "But in China, you do not always have the opportunity to choose your path to the future. I was assigned to study microbiology at an agricultural university. Still, I felt more fortunate than many others."

At Maryland, Ruan's doctoral studies focused on plant pathology and host interactions. After completing his Ph.D. in 1994, he went to work for the St. Louis-based Monsanto Co., one of the most influential agricultural corporations in the world.

He stayed with Monsanto for five years and helped establish the company's genomics program before moving to northern California to develop a program for the emerging biomedical research group Large Scale Biology. His work over the next three years allowed the company to seek and obtain public trading status.

"I realized at about that time that my interest and my work experience were really all about basic genomics research," Ruan says. So in 2002, when he heard that the accomplished American physician and genomic scientist Edison Liu had founded a new research institute in Singapore, Ruan sent him a long email note. Before the year was out, Ruan was working alongside Liu at the GIS.

Liu was impressed from the beginning with Ruan's ambition and accomplishments.

"Yijun's papers published in the journals Nature and Cell are landmark pieces in genomic science and allow us to visualize the global control of transcription," Liu says. "This approach gave us the first three-dimensional blueprint for global gene expression."

Ruan's work in Singapore bridged the institute's award-winning genome biology program with its state-of-the-art genomic technology platforms. His group worked closely with clinical researchers to identify a genetic variation that renders about 20 percent of Asian patients with chronic myeloid leukemia, or CML, resistant to the drug Gleevec, the standard treatment for controlling the condition. For non-Asian patient populations, Gleevec works well in a significantly higher percentage of cases, Ruan says.

"We developed a genome sequencing technology called DNA-PET to pinpoint the differences between the resistant patients' genomes and normal, non-resistant genomes," he says. "We were able to identify a specific deletion region in the Gleevec-resistant group, and to show that this deletion is indeed responsible for the resistance."

Now, knowing what to look for, a physician can order a simple laboratory test to determine if a leukemia patient carries this genomic variant. If the variant is found, the doctor can design a different treatment that does not waste the patient's time and money by treating with Gleevec.

"It is very fulfilling for me that my basic research can translate into clinical practice and benefit patients directly," Ruan says.

Ruan's GIS team dubbed the new genome analysis methodology "Paired-End Tag" sequencing—or PET. The leukemia study is just one example, Ruan says, of how PET and similar approaches can be used to identify patients who are vulnerable to certain disorders and are likely to respond well—or poorly—to specific treatments.

In his capacity as director of genomic sciences, Ruan will help expand and integrate genomic technology across the Laboratory's research community. He and his research group will develop innovative ways to answer fundamental genomic biology questions and to guide clinical and translational research.

"My mandate will be to create an effective, efficient, sustainable genomic platform across all the campuses that allows our researchers to talk to each other, to benefit from each other's work, and to access the most cutting-edge technology available," he says.

Ruan is working closely with Marc Lalande, Ph.D., professor and chairman of the UCHC Department of Genetics and Developmental Biology and associate dean for Research Planning and Coordination at the UConn School of Medicine. Lalande also heads up UConn's Stem Cell Working Group and is spearheading a new genomics institute at UConn that will support graduate programming in the biological sciences, medicine and dentistry, engineering, education, agriculture and other disciplines.

"I am doing everything I can to help Yijun get established as part of the research community here," Lalande says. He has gone so far as to hand over his own office at the UCHC Cell and Genome Sciences Building to Ruan.

"He is a huge intellect," Lalande says. "But he is also very unassuming and easy to get along with. I could not think of a better collaborator."

Just a matter of time

Ruan, whose family, including twin, college-aged sons, lives in Northern California, is getting to know the larger community of New England and the Hartford area in particular.

"I was convinced during the recruiting process that it would be good for my sons to experience the East Coast," he says, although he expects a certain amount of bi-coastal commuting will be the norm for the foreseeable future. Traveling to California will also allow him to work more closely with researchers at the The Jackson Laboratory, Sacramento, CA facility, he notes.

An ardent fan of professional basketball—the Miami Heat is his favorite team—Ruan, who played for his college team in China, looks forward to an exciting season of sports at UConn.

But mostly, he's eager to help accelerate research at The Jackson Laboratory for Genomic Medicine. Already, he says, the promise of genomic medicine is being realized, with new discoveries, technologies and investments making headlines regularly around the globe.

"JAX Genomic Medicine will further push the development of personalized care," he says. "In five to 10 years the technology will be so much more efficient and effective. People will have their own genomic information in their hands. They will be able to guide their lifestyles to help reduce the likelihood of developing disease. But if they get a disease, it can be quickly and accurately diagnosed to identify the best possible treatment.

"That's the promise of genomic medicine. We will get there. It's just a matter of time."

Cancer: Does it run in the family? 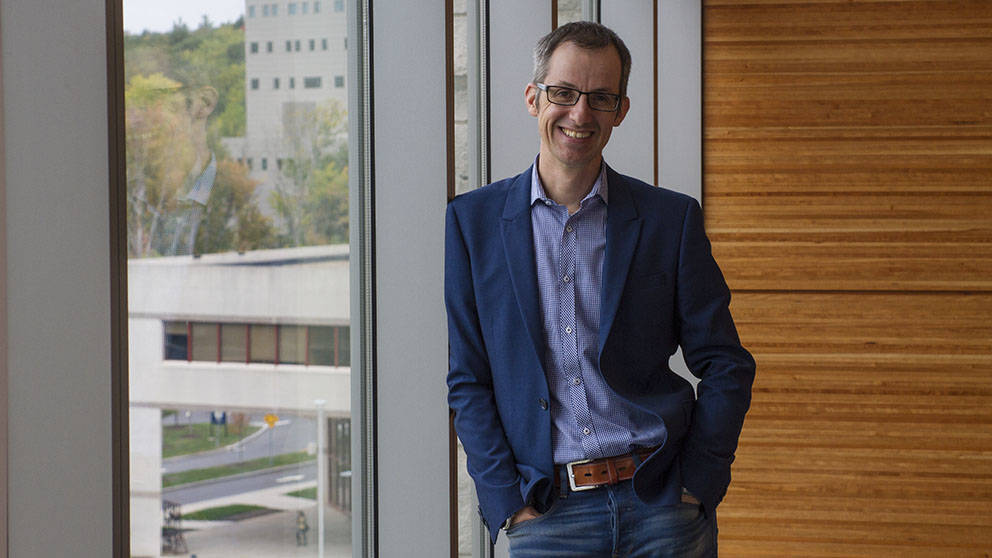 JAX bites back at dog cancer, with surprising results!