The importance of understanding substrains in the genomic age

The importance of mouse models in biomedical research is well known and appreciated. The mouse is widely used in all types of research, including basic genetics, physiology, drug discovery and other aspects of modeling human disease. Genetically defined inbred mice are universally accepted as the principal model for analyzing and understanding inherited human disorders1-4.

Scientists use inbred strains because they are well characterized, and many commonly used substrains have been inbred for more than 200 generations. Except for gender differences, inbred strains can be regarded as genetically and phenotypically uniform, giving researchers the freedom to make comparisons and draw conclusions from a variety of experiments conducted around the world. In the current age of genomics, with the ability to genetically manipulate the mouse genome in an ever-increasing variety of ways, it is more important than ever to understand the differences among inbred strains and substrains of mice.

Most commonly used inbred strains, defined by 20 or more generations of consecutive sibling matings, were generated during the early 20th century. Early mouse geneticists readily distributed these inbred parent strains to colleagues around the world, who subsequently bred and distributed them to their colleagues. The result was the creation of multiple substrains within an inbred strain that became increasingly more genetically divergent through generations of independent inbreeding5,6.

As demand for commonly used inbred strains increased, mouse vendors established colonies of specific substrains and implemented various genetic quality-control measures to ensure the genetic integrity of their inbred strains. To the uninitiated user of the inbred laboratory mouse, the differences between individual substrains and, thus, differences between mice from different sources may seem unimportant. Upon closer scrutiny, substrain differences, primarily genetic in nature, could lead to inconsistent data, misinterpretation of results or even complete failure of an experiment.

Genetic differences among substrains can occur by several mechanisms:

Substrains occur when colonies are separated by more than 20 generations from the progenitor strain, and are considered to be genetically distinct (refer to nomenclature guidelines at: www.informatics.jax.org/nomen).

Although it is often difficult to decipher the exact genetic causes, substrains from different sources can lead to functional differences among mice. For example:

A substrain designation is added to a strain name if a colony has been separated from its progenitor strain for 20 or more generations, if genetic differences are detected, or for strains that are maintained completely independent of the progenitor strain. The websites of most mouse vendors provide information regarding the origin of substrains maintained at their facility, including the generation of separation from the founder strain, as recommended by the International Committee on Genetically Standardized Nomenclature for Mice.

There are many reasons JAX® Mice are the substrain of choice in the current environment of genome analysis and genetic manipulation:

In large breeding facilities such as the production facility at The Jackson Laboratory, it is necessary to maintain pedigree traceability, maximize homogeneity within each strain, and generate large numbers of mice for distribution. The Jackson Laboratory employs systematic breeding and genetic quality control protocols to maximize homogeneity and minimize genetic drift. 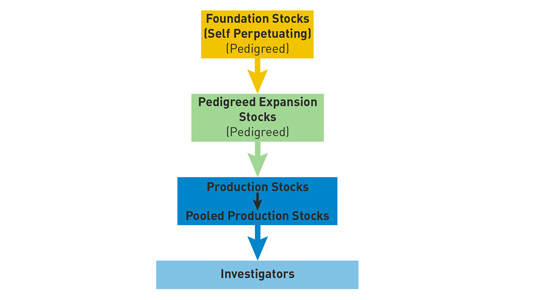 Using this system, colonies are expanded from a single ancestral pair to produce large numbers of genetically uniform mice in a minimum number of generations. This separation, plus cryopreservation of embryos from each strain, provides insurance against the loss of a strain in the event of fire, disease or other catastrophic event. The pedigree relationships in foundation stocks of all strains are controlled so that the breeding pairs in foundation stocks are traceable to a common ancestor in as few generations as possible.