B10.mdx, D2.mdx, and their wild type controls were tested in open field for 30 min. Wildtype mice initially explore their new environment, resulting in high distanced traveled. Over time they move around less. Both B10.mdx and D2.mdx move less than their wild type controls in the open field test. The D2.mdx model has a more severe ambulation deficit. 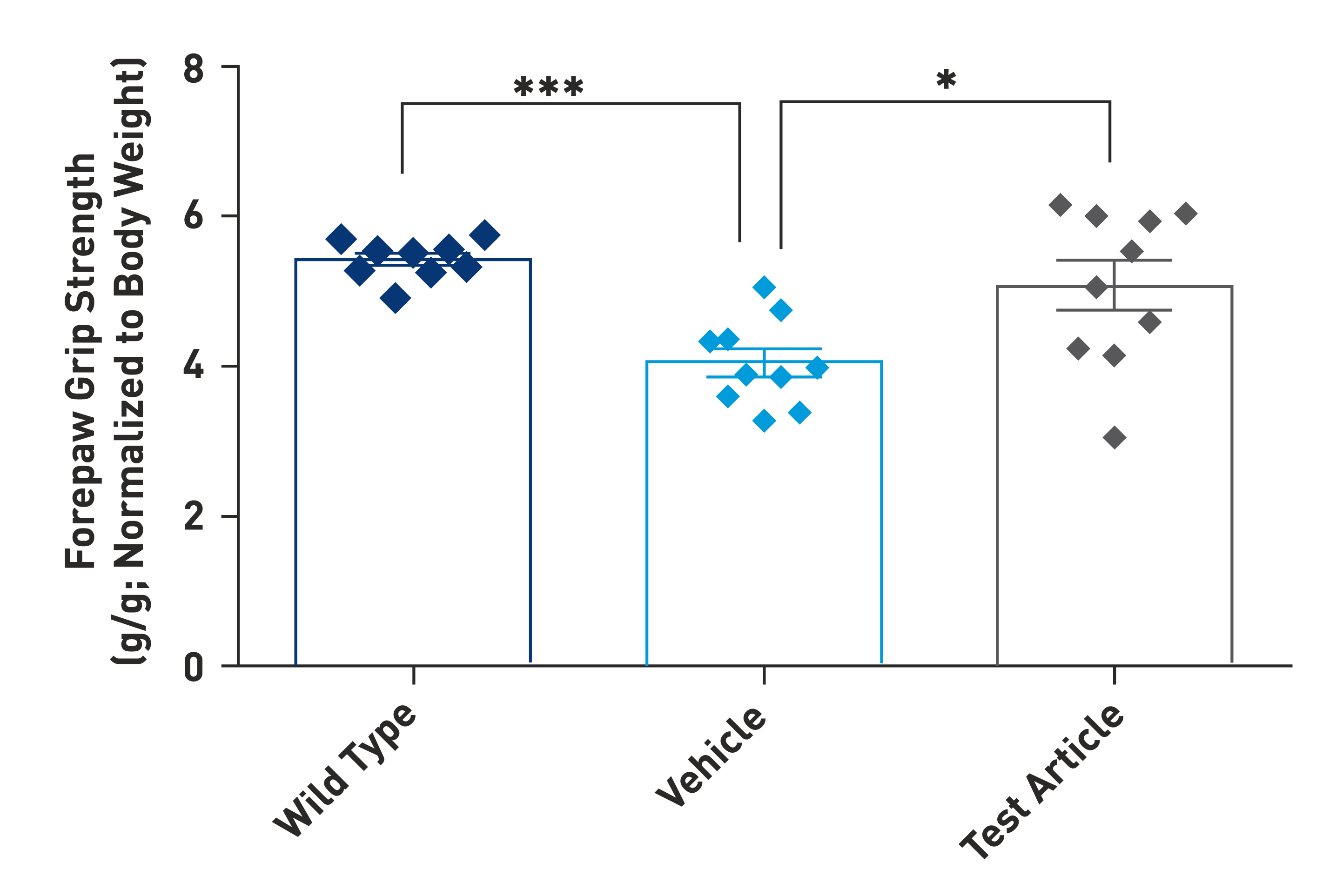 Grip strength is measured in grams by a grip-strength meter on live mice, and normalized to their body weight. D2.mdx mice (Vehicle) are weaker than the wild type controls. Grip strength is restored to close to wildtype levels by treating D2.mdx mice with a test article. 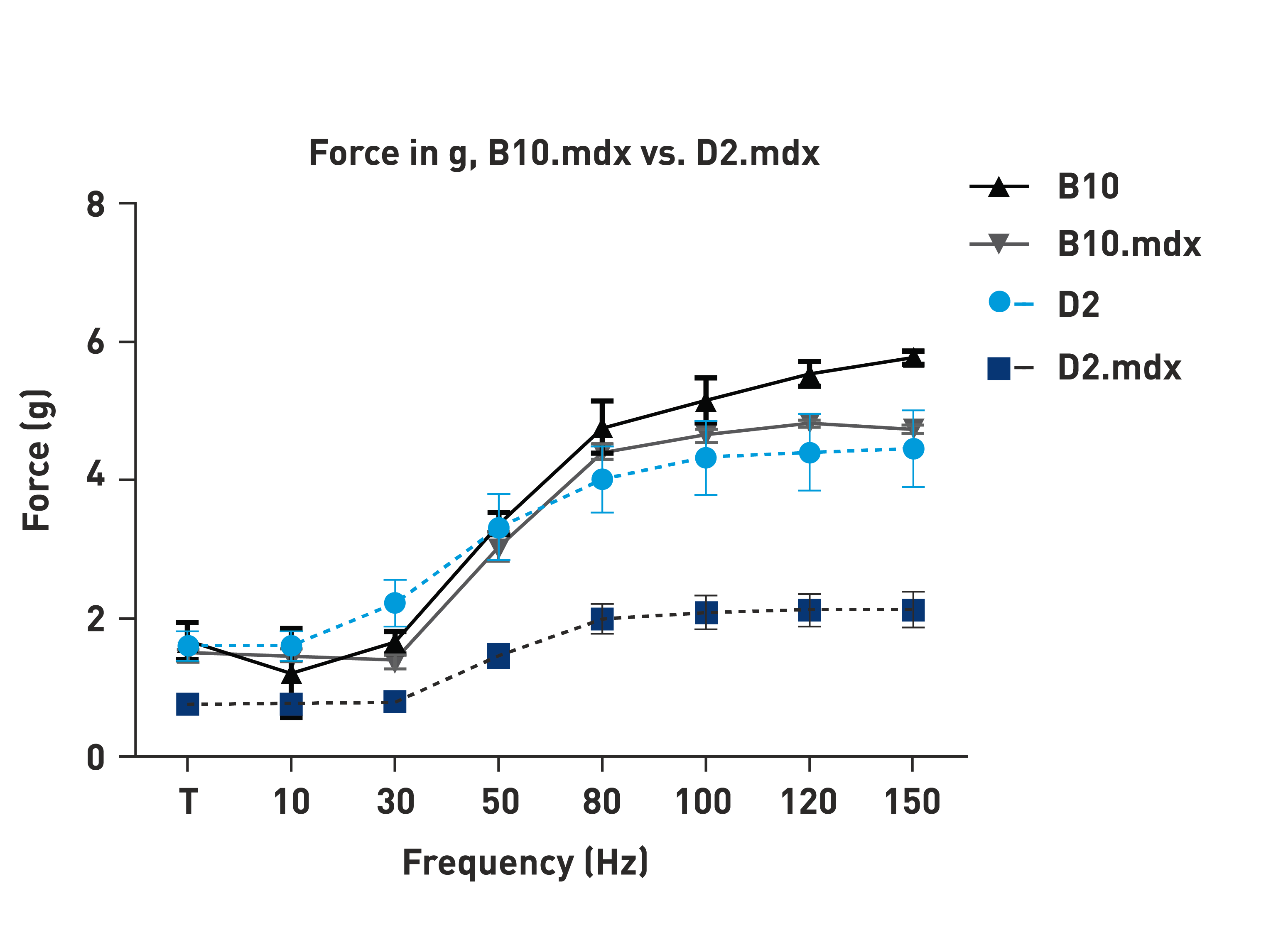 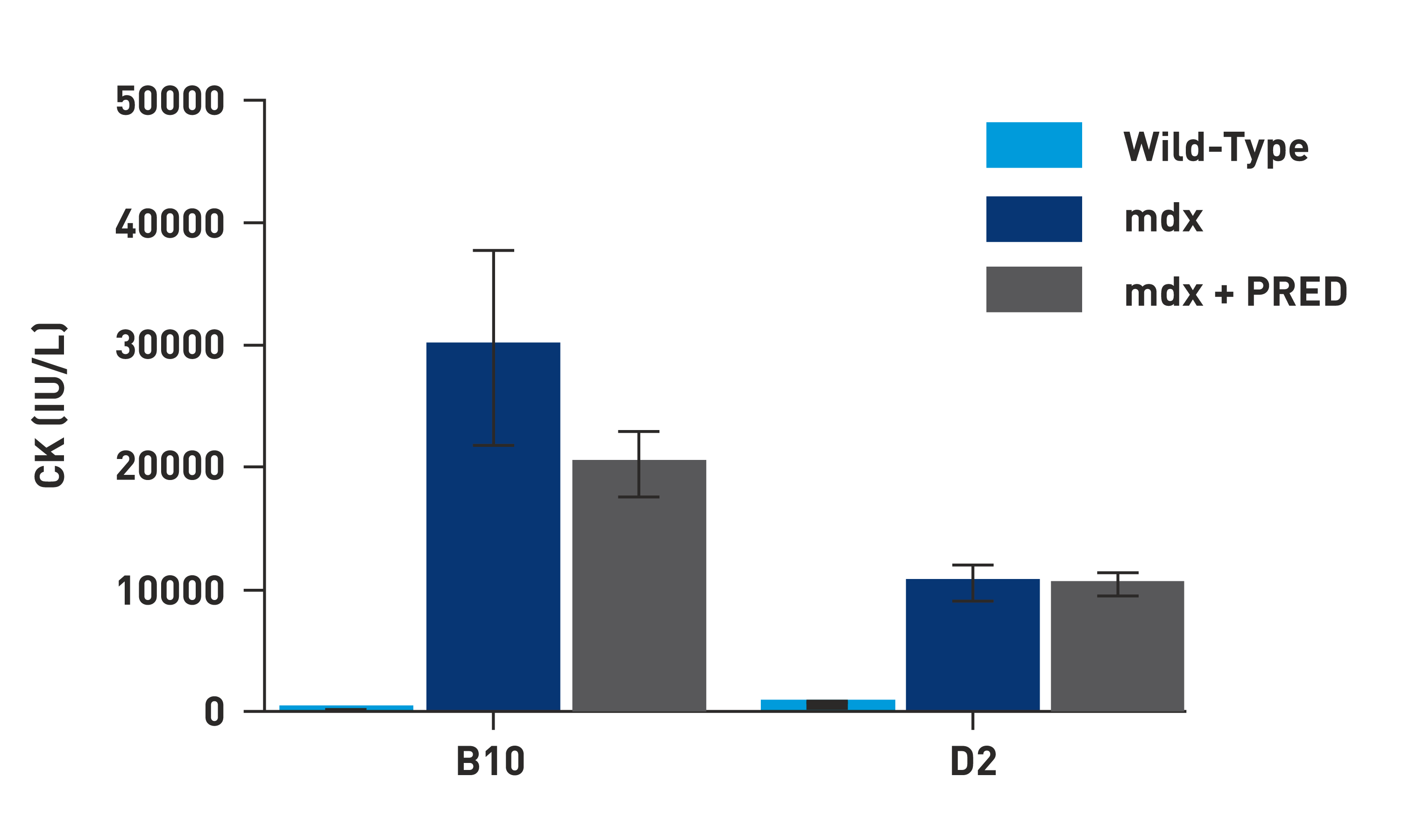 Serum creatine kinase (CK) is an indicator of muscle injury. The break down of hypertrophic, large muscle fibers in B10.mdx is associated with higher serum CK levels than in D2.mdx, characterized by atrophied muscles. Treatment of B10.mdx mice with Prednisolone (PRED) decreases the serum CK levels in B10.mdx. 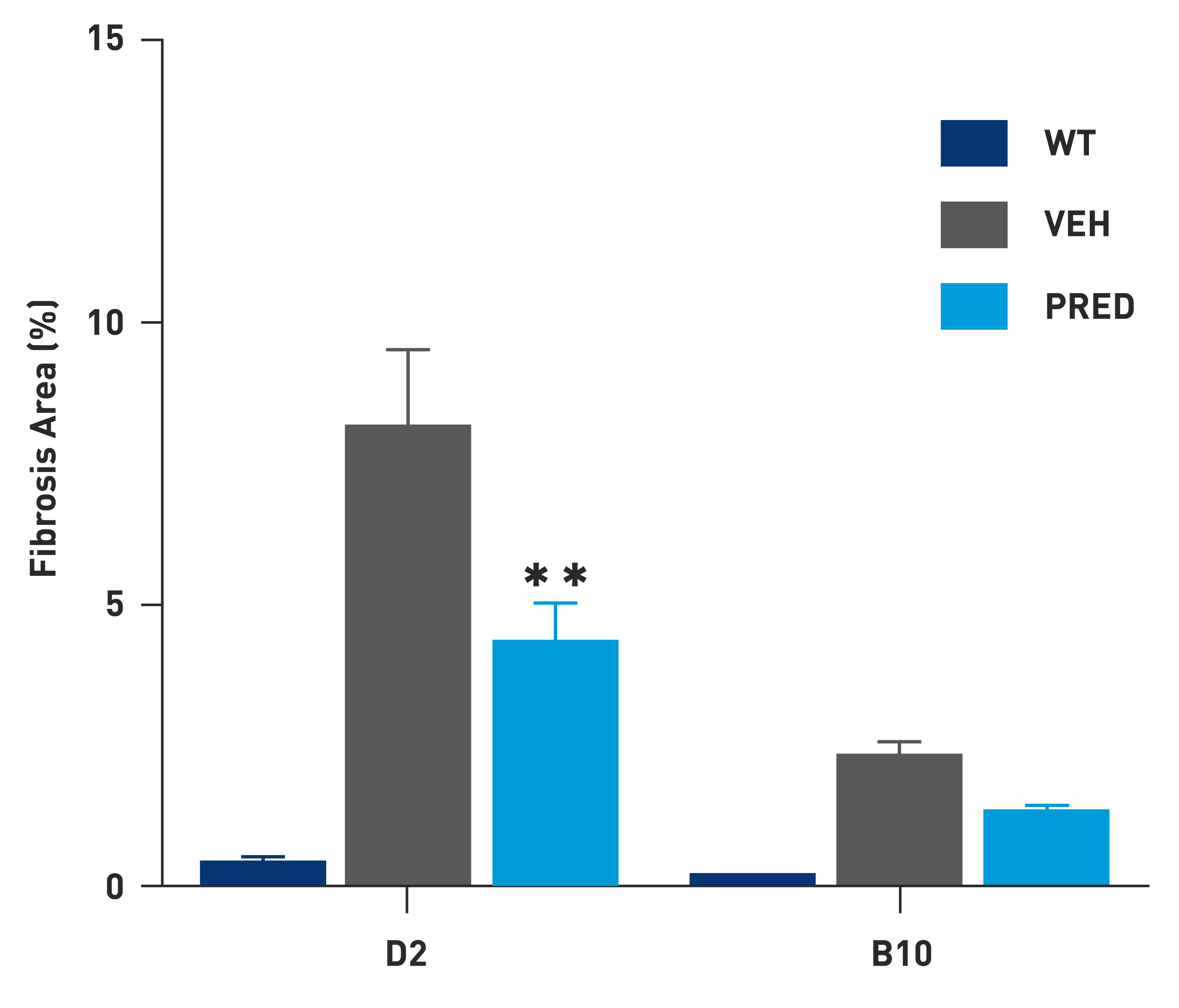 The Sirius Red staining measures the fibrosis in the skeletal muscle of D2.mdx at 8 weeks of age. Fibrosis is indicated by the thick red staining between the cells (see arrows). 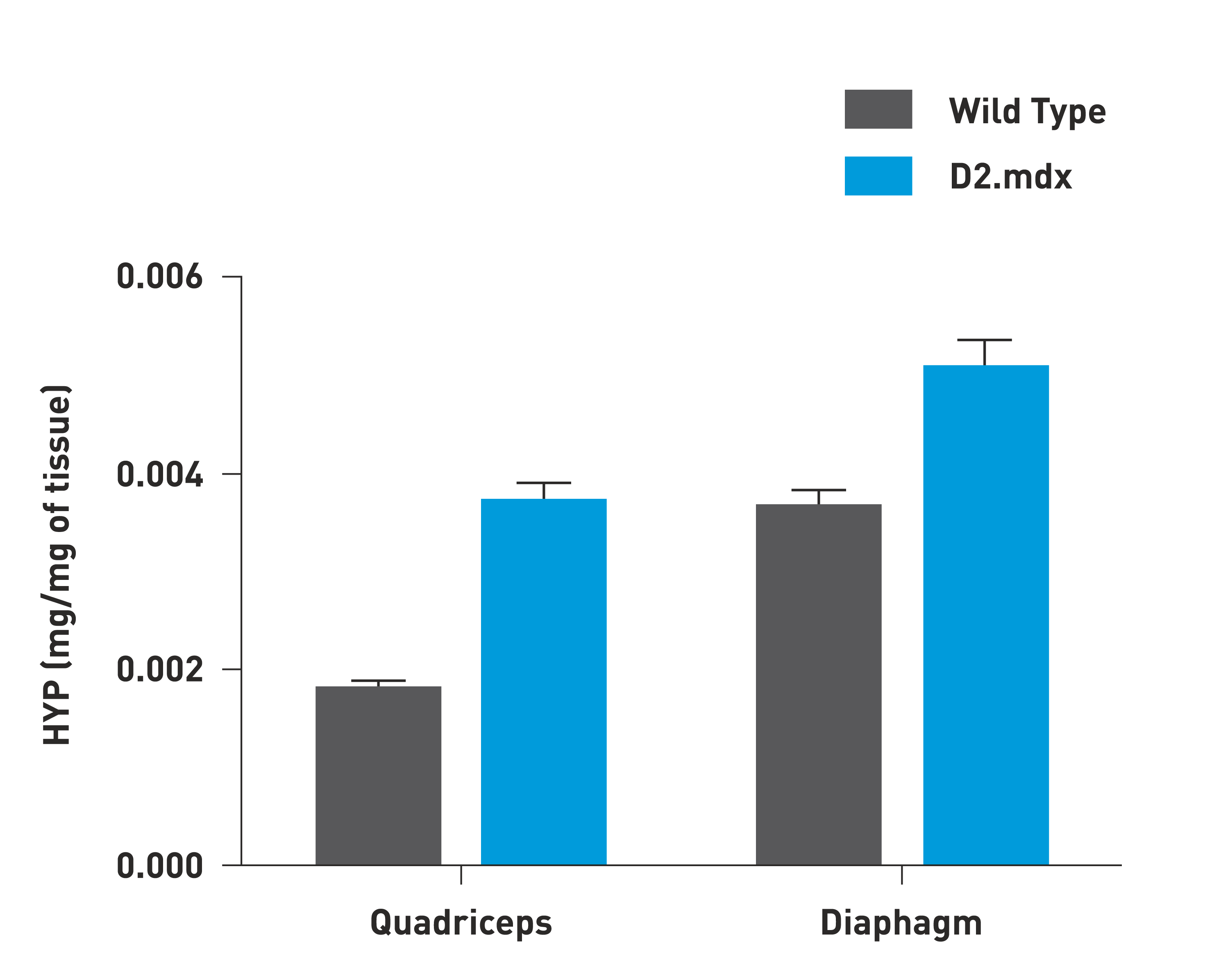 Hydroxyproline levels are a measurement of fibrosis in the skeletal muscle. D2.mdx mice have more fibrosis than the wild type controls, thus more hydroxyproline in both the quadriceps and diaphragms of D2.mdx mice. 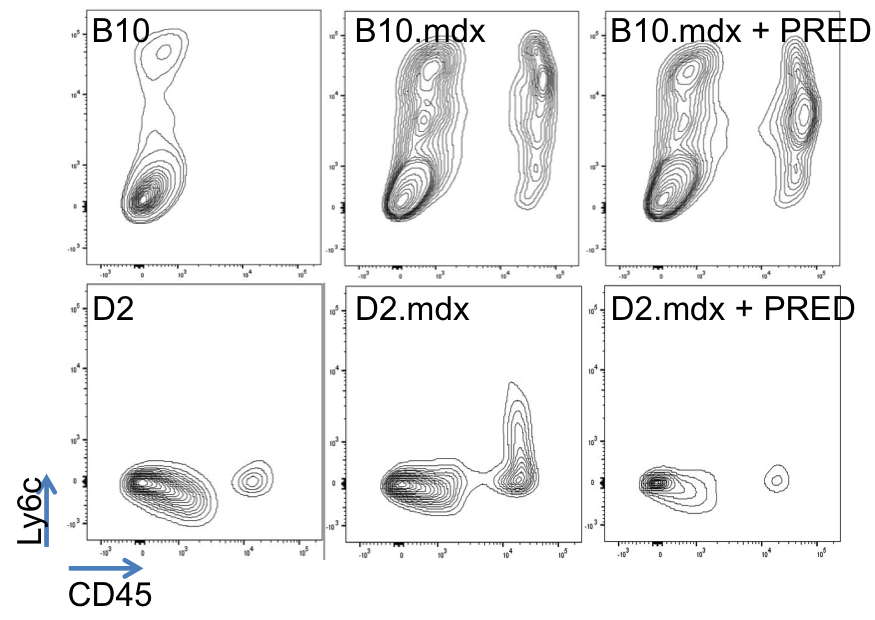 Flow cytometry allows the enumeration of cell populations contributing to muscle inflammation and their response to anti-inflammatory test articles. Single cells isolated from the skeletal muscle are in majority CD45- in wild type mice (left); in mdx, the abundance of CD45+ (immune) cells increases. Many express Ly6c, a marker of inflammatory monocytes. The treatment of mdx with prednisone decreases the abundance of CD45+ immune cells and prevents the apparition of Ly6C+ inflammatory cells. B10.mdx muscles contain more inflammatory immune cells than D2.mdx muscles. 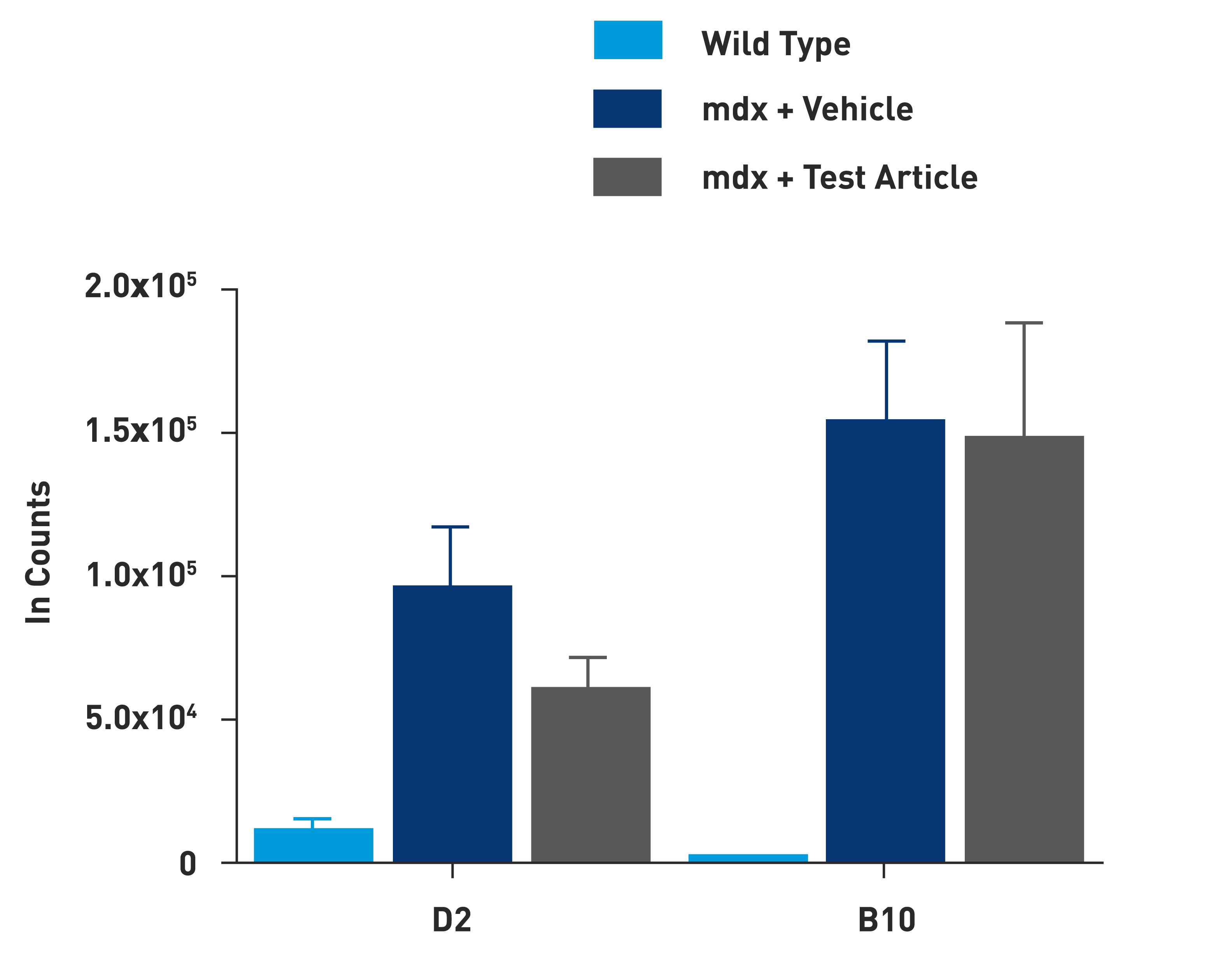 Automated morphometry measurements plot the frequency distribution of muscle fibers based on their diameter and detects hypertrophy (increase in large fibers) or small, abnormal fibers. Both B10.mdx (left) and D2.mdx (right) mice have an increase in hypertrophy compared to wildtype (compare Vehicle to WT), but B10.mdx mice have greater hypertrophy than D2.mdx. In D2.mdx mice, Prednisolone (PRED) further increased the percentage of small, fibers – a side effect of long term exposure to corticoids. 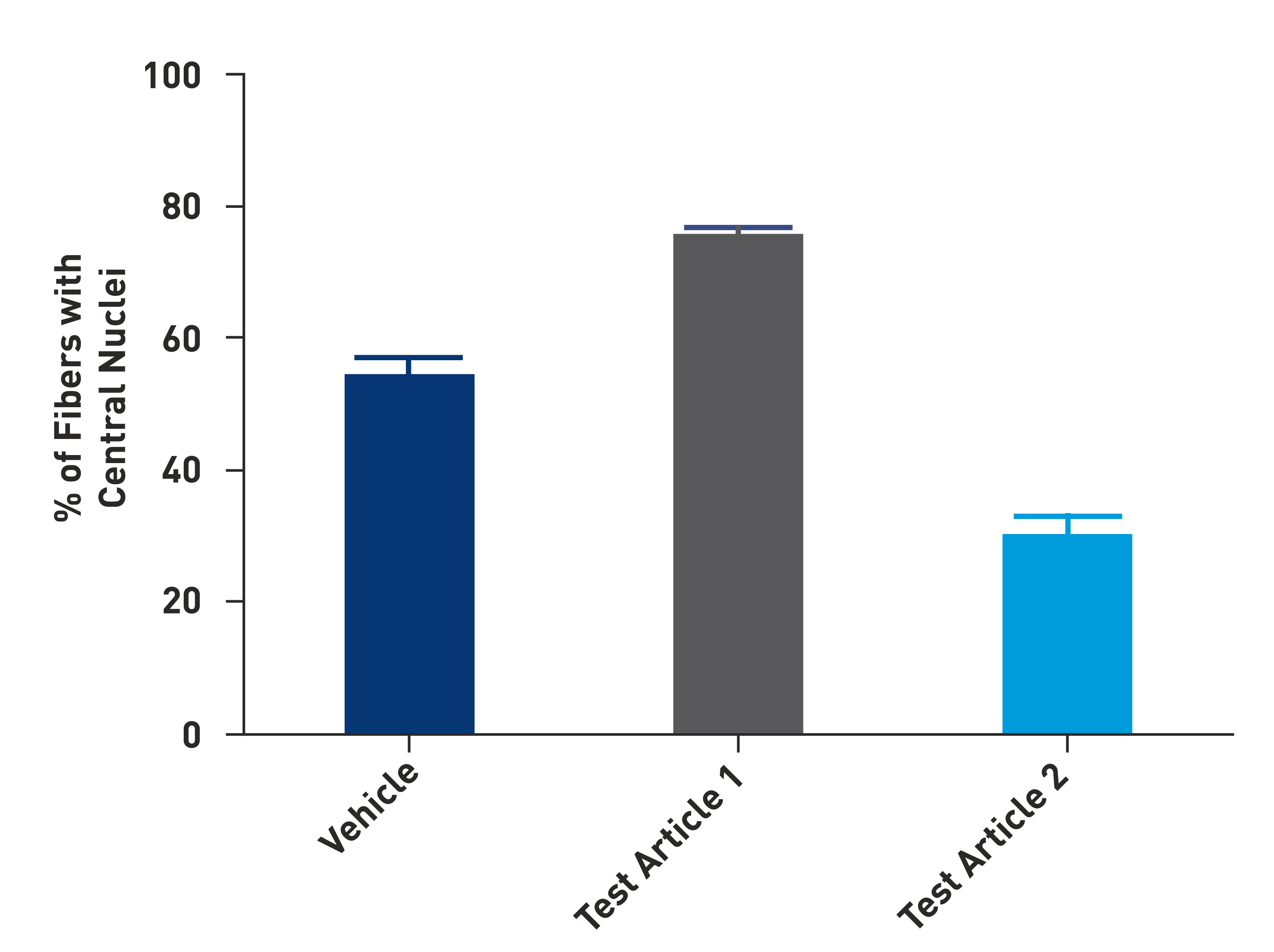 Automated morphometry measurements on muscle sections (here at 8 weeks of age) can detect changes in regeneration (% of central nuclei) in the muscle. Treatment of D2.mdx mice with some test articles can increase or decrease regeneration in the muscle (Article 1 or 2).