'We designed and constructed a large map with 18 chromosomes made of vertically placed cardboard tubing, each about four inches in diameter and five feet long, and with small plastic cages holding the mutant mice appropriately arranged at intervals beside the chromosomes. The project was a great success.' – Margaret Green on the creation of her Live Linkage Map of the mouse

Named after Margaret Green, who maintained and expanded a comprehensive map of the mouse genome over a period of more than 20 years.

Your privileges include all Douglas Coleman Signature Society privileges, plus: 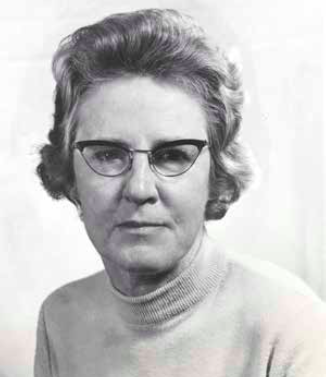 Margaret Green, Ph.D., joined the research sta at the then Roscoe B. Jackson Memorial Laboratory in 1956. Two years later she began collecting mouse genetic mapping data that would eventually become the foundation of the Mouse Genome Database, a global resource for researchers.

Green received her Ph.D. in genetics and cytology from the State University of Iowa in 1940. She served as a teaching assistant at Brown University where she first met her husband, Earl Green. She would go on to teach at Ohio State University where she and Earl reconnected. They married in 1941. She was employed at the National Science Foundation in Washington, DC, and in 1954 she served as the first program director for genetic and developmental biology in the Division of Biological and Medical Sciences. In 1956, her husband was appointed JAX’s second director, succeeding founder Clarence Cook Little.

Green’s research involved compiling information about mutated genes and normal genetic variants of the mouse. In 1958 she began collecting mouse genetic mapping data from the literature of the early 1950s. She used this information to create the Live Linkage Map—a large map with 18 “chromosomes” made of vertically placed cardboard tubing (each about four inches in diameter and five feet long). Small plastic cages holding mice were appropriately arranged at intervals beside the chromosomes.

She continued to maintain the mouse genetic mapping data file on notecards until her retirement. Those 4” x 6” notecards formed the basis of what is now known as Mouse Genome Informatics, an extensive, internationally renowned database resource for the laboratory mouse.

Green retired from the Laboratory in 1975 as a senior sta scientist. In 1981, she published a seminal and comprehensive book, Genetic Variations and Strains of the Laboratory Mouse, with descriptions of mouse genes and mutations, strain information, a map of the mouse genome and the genetic mapping data that she used to create it. Margaret Green passed away in January, 1995.