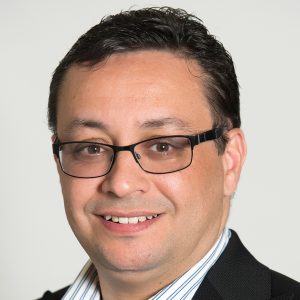 Dr. Merghoub received his B.A. degree from University of Algiers, Algeria and his M.S. and Ph.D. degrees with highest distinction from the University of Paris, France. His thesis work with Dr. Elion focused on the study of genetic polymorphism in the fetal hemoglobin gene in patients with sickle cell anemia and thalassemia. His findings provided insight to the correlation of genotypes and phenotypes in sickle cell anemia and thalassemia. This and other graduate work resulted in 9 publications, 3 of them as first author. In post-doctoral research with Dr. Pier Paolo Pandolfi at MSKCC, he characterized the transcriptional properties of the Pokemon gene and its role during development. He also played an active role in the generation of mouse models for acute promyelocytic leukemia, furthering his expertise in mouse genetics. These projects led to publications in Nature and Science. Dr. Merghoub then became a Senior Research Scientist in Dr. Houghton’s lab, and he is now an Attending Lab Member in the Melanoma and Immunotherapeutic Service and Co-director of the Ludwig Collaborative Laboratory (Wolchok lab). He is Professor of Immunology Research in Medicine, Weill Cornell. He is member researcher at the Parker Institute for Cancer Immunotherapy at MSKCC. He is also the lead of the tissue repository of the immunotherapy and melanoma groups. His research focuses on developing means to overcome resistance to checkpoint blockade and on developing tools to study tumor immunology. He also investigates the pathogenesis and treatment of melanoma. These projects are heavily collaborative in nature, within the Wolchok lab/Ludwig Collaborative Lab and across different disciplines at MSKCC.