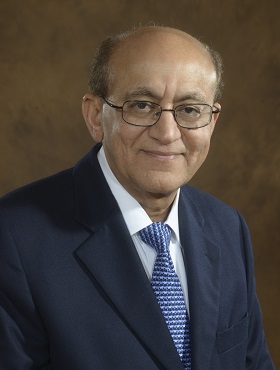 Dr. Jain is regarded as a pioneer in the field of tumor microenvironment and widely recognized for his seminal discoveries in tumor biology, drug delivery, in vivo imaging, bioengineering, and bench-to-bedside translation.  These include uncovering the physical and physiological barriers to the delivery and efficacy of molecular-, nano- and immuno-therapies in tumors; developing new strategies to overcome these barriers; and then translating these strategies from bench to bedside, and in the process discovering new biomarkers and new strategies to improve the outcome further.  He is most celebrated for proposing a new treatment principle – normalization of vasculature – for malignant and non-malignant diseases characterized by abnormal vessels that afflict more than 500 million people worldwide. This work has fundamentally changed the thinking of scientists and clinicians about how molecularly targeted therapeutics, especially anti-angiogenic agents, work in animal models and patients, how to combine them optimally with other therapies, including immunotherapies, to improve the treatment outcome in patients and led to the approval of Avastin for Neurofibromatosis-2 patients in UK in 2014. His recent efforts are focused on reengineering the tumor microenvironment using angiotensin system inhibitors to improve the delivery and efficacy of therapeutics in highly fibrotic tumors. This new concept led to a successful phase II trial on losartan and chemo-radio-therapy in pancreatic cancer at MGH.

Dr. Jain's capacity to integrate knowledge from engineering, optics, mathematics, physiology, immunology and molecular biology is central to his uniquely multidisciplinary approach to tumor biology. He has developed the world's leading laboratory for the quantitative study of tumor microenvironment and the role of physical forces in tumor progression and treatment response. He has been generous in sharing these model systems, and has catalyzed the progress in this field worldwide.

A chemical engineer by training and a mentor to more than 200 masters, doctoral and postdoctoral students from over a dozen different disciplines, and a collaborator of a similar number of clinicians and scientists worldwide, Dr. Jain's findings are summarized in more than 680 publications, including 4 in Scientific American (Web of Science citations > 85,000, h-index 142, August 2017; one of the top 1% cited researchers in Clinical Medicine in 2014, 2015, 2016). He has edited seven monographs on topics ranging from engineering to cancer.  He serves or has served on advisory panels to government, industry and academia, and on editorial advisory boards of 22 journals, including Nature Reviews Cancer, Nature Reviews Clinical Oncology, and PNAS. He is a recipient of more than 75 awards, including a Guggenheim Fellowship (1983-1984), Humboldt Senior Scientist Award (1990-1991), Research Career Development Award (1980-1985) and Outstanding Investigator Grants (1993-2000 and 2015-2022) both from the National Cancer Institute, Distinguished Alumni Award from IIT-Kanpur (1994) and University of Delaware (2003), Academic Scientist of the Year Award from the Pharmaceutical Achievements Awards (2005), Breast Cancer Research Innovator Award from the Department of Defense (2010-5), American Cancer Society Basic Science Lecture, Society of Surgical Oncology (2011), Rous Rous-Whipple Award from the American Association of Investigative Pathologists (2011), Science of Oncology Award from the American Society of Clinical Oncologists (2012), and Princess Takamatsu Lectureship Award from the American Association for Cancer Research (2014). In 2014, he was chosen as one of 50 Oncology Luminaries on the occasion of the 50th anniversary of the American Society of Clinical Oncology. In 2015, he received honorary doctorates from Duke University, KU Leuven, Belgium and his alma mater IIT-Kanpur. He has the rare distinction of being member of all three branches of the US National Academies - the Institute of Medicine (2003), the National Academy of Engineering (2004) and the National Academy of Sciences (2009). In 2016, he received the 2013 US National Medal of Science from President Barack Obama – “For pioneering research at the interface of engineering and oncology, including tumor microenvironment, drug deliver and imaging; and for discovering groundbreaking principles guiding the development and novel use of drugs for cancer and non-cancerous diseases.”

Further details about Dr. Jain’s research can be found at http://steele.mgh.harvard.edu. and his list of publications at http://www.ncbi.nlm.nih.gov/sites/myncbi/collections/public/12905binc_ksg31Hhaufhbs5m/?sort=date&direction=descending