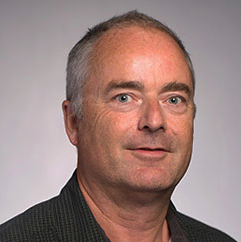 Paul Franken received his PhD from the University of Groningen,The Netherlands, in 1993 for his work on sleep homeostasis and thermoregulation at the University of Zurich under the direction of Alexander A. Borbély. He was a postdoctoral fellow with H. Craig Heller at Stanford University, USA, where he studied the cellular mechanisms underlying circadian clock resetting. In 1996 he joined Mehdi Tafti at the University of Geneva where he used QTL analysis to map sleep and EEG traits in mice. He then moved back to Stanford in 2000 as a senior research scientist to establish an independent lab. At Stanford he continued to work on the genetics of sleep homeostasis and further focused on the molecular interactions between circadian rhythms, sleep homeostasis, and brain metabolism. He joined the CIG in 2005.