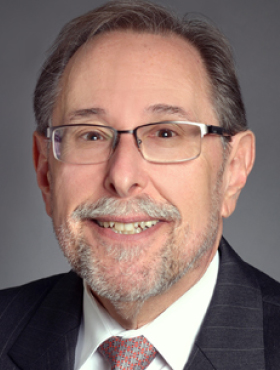 Dr. Schilsky is the Executive Vice President and Chief Medical Officer (CMO) of ASCO. Formerly the Chief of Hematology/Oncology in the Department of Medicine and Deputy Director of the University of Chicago Comprehensive Cancer Center, he is a highly respected leader in the field of clinical oncology. He specializes in new drug development and treatment of gastrointestinal cancers. Dr. Schilsky is a Past President of ASCO, having served in the role during 2008-2009, and also a Past Chair of one of the National Cancer Institute’s Cooperative Groups, Cancer and Leukemia Group B (CALGB). Dr. Schilsky’s impressive experience and many accomplishments in both clinical medicine and clinical research reflect his deep passion for cancer medicine. He has spent the majority of his career at the University of Chicago where he joined the faculty in 1984, subsequently rising to the rank of Professor of Medicine and serving in many roles, including Associate Dean for Clinical Research in the Biological Sciences Division and Director of the University of Chicago Cancer Research Center. From 1995 to 2010, Dr. Schilsky served as chair of the Cancer and Leukemia Group B, a national cooperative clinical research group funded by the National Cancer Institute (NCI).

He has extensive experience working with both the NCI and the Food and Drug Administration (FDA) having served as a member and chair of the NCI Board of Scientific Advisors, as a member of the NCI Clinical and Translational Research Committee, and as a member and chair of the Oncologic Drugs Advisory Committee of the FDA. Presently, he serves as a member of the board of directors of Friends of Cancer Research and of the Reagan-Udall Foundation for the FDA. Dr. Schilsky has served on the editorial boards of many cancer journals, including the Journal of Clinical Oncology. He presently serves on the editorial board of the New England Journal of Medicine. Dr. Schilsky is the author of nearly 400 original research articles, reviews and commentaries. Early in his career, he worked in the Clinical Pharmacology Branch of the Division of Cancer Treatment at the NCI and was an Assistant Professor in the Department of Internal Medicine, Division of Hematology and Oncology at the University of Missouri-Columbia School of Medicine. He was also the head of the hematology/medical oncology unit at the Harry S. Truman Veterans’ Administration Hospital in Columbia, Missouri.