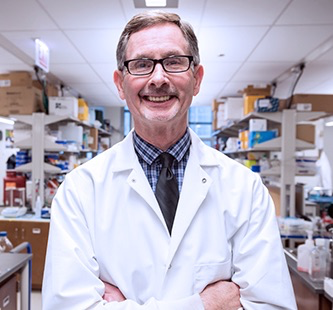 Dr. C. David James trained as a post-doctoral fellow at the Ludwig Institute for Cancer Research, Montreal, with Dr. Webster Cavenee, from 1986-89. During his post-doctoral training he developed an interest in the genetics and molecular biology of brain tumors, which has served as the primary focus of his research for 32+ years. His first independent position was as a Senior Staff Investigator in the Department of Neurosurgery at Henry Ford Hospital in Detroit, MI, where he was a key contributor in launching the institution’s initial program in neuro-oncology research. In 1991 Dr. James relocated to Emory University as faculty in the Department of Neurosurgery, and, as before, helped initiate a program in neuro-oncology research. In 1996 he accepted a faculty position in the Department of Laboratory Medicine and Pathology at the Mayo Clinic, Rochester, MN, where he was promoted to Professor in 2001. During his tenure at Mayo (1996-2006) Dr. James’ research leadership was of fundamental importance to establishing Neuro-Oncology as a premier program in the Mayo Comprehensive Cancer Center. In 2006 Dr. James joined the outstanding faculty of the University of California San Francisco Department of Neurological Surgery as the Guggenhime Endowed Chair and Associate Director of the Brain Tumor Research Center. In 2014, Dr. James accepted a faculty appointment in the Feinberg School of Medicine at Northwestern University, as the Vice-chair of Research for the Department of Neurological Surgery, and was subsequently appointed Scientific Director of the Malnati Brain Tumor Institute. In this capacity he has worked with an exceptional faculty in seeing to the expansion of brain tumor research at the School of Medicine, and these efforts were recently rewarded in the form of a Specialized Program of Research Excellence (SPORE) grant from the National Cancer Institute.

In addition to his independent as well as programmatic research activities, that utilize brain tumor genetic information for testing therapeutic hypotheses in rodent models, Dr. James has been a member of the editorial boards for Clinical Cancer Research (2000-2010), International Journal of Oncology (2007-present), Journal of Neuropathology & Experimental Neurology (1995-2008), Science Advances (2015-2018), and Neuro-Oncology (1998-present) that included a term as Senior Editor (2007-2013).  Dr. James served as the Basic Science Director for the Society for Neuro-Oncology from 1999-2001, and has served on Scientific Advisory Committees for the National Brain Tumor Society, Pediatric Brain Tumor Foundation, and the Southeastern Brain Tumor Foundation.  He has served on numerous review committees for the National Institutes of Health, including a 6-year term as a member of the Clinical Neuroimmunology and Brain Tumors Study Section. Dr. James’ research has been continuously supported by the NIH since 1991, and he has authored/co-authored more than 230 peer-reviewed research publications and invited reviews that have been cited more than 28,000 times, and among which he is best known for his seminal contributions involving genetic alterations that are associated with brain tumor development.