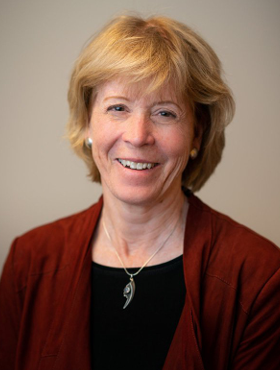 Cynthia Burrows received a B. A. in Chemistry from the University of Colorado and the Ph.D. degree in the area of physical organic chemistry at Cornell University working with Prof. Barry Carpenter. After postdoctoral studies in Strasbourg, France, in the laboratory of Nobel Laureate Jean-Marie Lehn, she began her independent career at Stony Brook University in 1983, and then moved to the University of Utah in 1995.

Her work examines the mechanisms by which free radical oxidants modify DNA bases and the impact of these changes on enzymes that process DNA.  She is the recipient of the ACS Cope Scholar Award, the James Flack Norris Award in Physical Organic Chemistry (ACS) and the Gibbs Medal (ACS), and is also a member of the American Academy of Arts and Sciences and the National Academy of Science. She has served in several capacities with ACS Publications and is currently Editor-in-Chief of Accounts of Chemical Research.