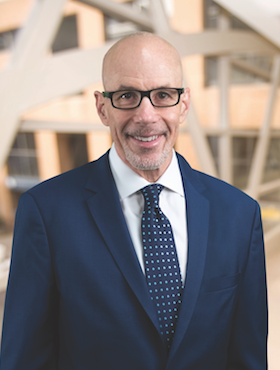 Dr. Klasko is an advocate for transformation in health care and higher education.   As president and CEO of Philadelphia-based Thomas Jefferson University and Jefferson Health since 2013, he leads one of the nation’s fastest growing academic health institution based on his vision of re-imagining the future. Jefferson Health grew from three hospitals in 2013 to 14 hospitals in 2018. His 2017 merger of Thomas Jefferson University with Philadelphia University created a professional university with top-20 programs in fashion, design, health and the first design-thinking curriculum in a medical school. His track record earned him a place as tied for #2 “Most Influential” individuals in healthcare by Modern Healthcare, as #21 in Fast Company’s 100 Most Creative People in Business 2018 and Philadelphia Entrepreneur of the Year 2018. He is an obstetrician, has been dean of two medical schools, and believes that creativity is the key skill for students in any profession in the age of augmented intelligence and robotics.