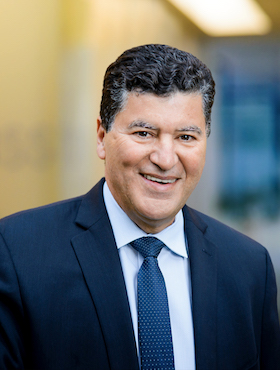 A native of Algeria where he received his basic education and training, Dr. Zerhouni’s academic career was spent at the renowned Johns Hopkins University and Hospital where he is currently professor of Radiology and Biomedical Engineering and senior advisor for Johns Hopkins Medicine. He served as chair of the Russell H. Morgan Department of Radiology and Radiological Sciences, vice dean for Research and executive vice dean of the School of Medicine from 1996 to 2002 before his appointment as director of the National Institutes of Health from 2002 to 2008. He has authored over 200 publications, holds eight patents and has founded or co-founded five start-up companies.

Dr. Zerhouni holds a number of prominent positions on prestigious boards, including most recently senior fellow of the Bill and Melinda Gates Foundations, the board of trustees of the Mayo Clinic and the Lasker Foundation. Among his many honors, Dr. Zerhouni earned membership into the Institute of Medicine of the U.S. National Academy of Sciences in 2000 and the prestigious Legion of Honor medal from the French National Order in 2008. He was appointed as chair of Innovation at the College de France and elected to membership at the French Academy of Medicine in 2010. He was appointed to his present position on January 2011.