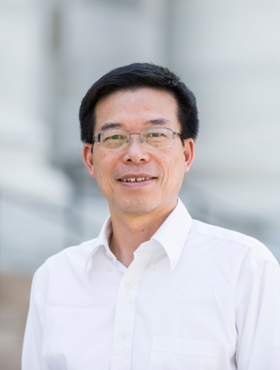 Yi Zhang is an Investigator of the Howard Hughes Medical Institute and a Fred Rosen Chair Professor of the Department of Genetics and Department of Pediatrics of the Harvard Medical School. He is also a senior Investigator of the Program of Cellular & Molecular Medicine of the Boston Children’s Hospital and Associate Member of the Harvard Stem Cell Institute and the Broad Institute. Before joining Harvard, he was a Kenan Distinguished Professor at UNC-Chapel Hill. His major interest has been the epigenetic basis of gene expression in early development, stem cell reprogramming, and reward-related learning and memory. He is also interested in how dysregulation of epigenetic enzymes contributes to various human diseases including cancer and drug addiction.

Dr. Zhang is a highly accomplished protein biochemist and enzymologist known for his work in identifying and characterizing several classes of epigenetic enzymes that include the nucleosome remodeling and deacetylase (NuRD) complex, several histone methyltransferases (e.g. Ezh2/PRC2, Dot1L), the JmjC-containing histone demethylases, histone H2A ubiquitin E3 ligase PRC1, and the TET family of 5-methylcytosine dioxygenases. In recent years, he contributed to the understanding of epigenetics and chromatin remodeling in mammalian preimplantation development by uncovering a role of nucleosome assembly in nuclear pore complex formation of the male pronucleus, identifying the first transcription factor (NFYA) important for zygotic genome activation, and uncovering a DNA methylation-independent genomic imprinting mechanism that is critical for imprinted X-inactivation. He also identified and found ways to overcome the epigenetic barriers to somatic cell nuclear transfer reprogramming, which made the cloning of non-human primate possible. Recently, he uncovered the genomic origin, biogenesis, and the immunostimulatory function of extrachromosomal circular DNAs. Dr. Zhang was named a Top 10 author of high impact papers in Genetics and Molecular Biology (2002-2006), and one of the most influential scientists in the world by ScienceWatch (2004-2014). He has published over 180 high impact papers (https://scholar.google.com/citations?user=7UjSqHEAAAAJ&hl=en&oi=ao) with more than 74,000 citations and an H-index of 113.