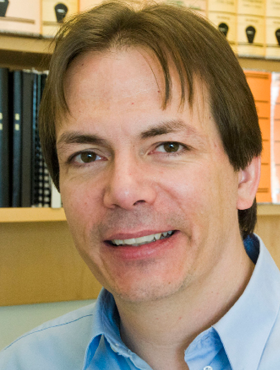 Evan Eichler, Ph.D., is a Professor and Howard Hughes Medical Institute Investigator in the Department of Genome Sciences, University of Washington School of Medicine. He graduated with a B.Sc. Honours degree in Biology from the University of Saskatchewan, Canada, in 1990. He received his Ph.D. in 1995 from the Department of Molecular and Human Genetics at Baylor College of Medicine, Houston, Texas. After a Hollaender postdoctoral fellowship at Lawrence Livermore National Laboratory, he joined the faculty of Case Western Reserve University in 1997 and later the University of Washington in 2004. He was a March of Dimes Basil O’Connor Scholar (1998–2001), appointed as an HHMI Investigator (2005), awarded an AAAS Fellowship (2006) and the American Society of Human Genetics Curt Stern Award (2008), and elected to the National Academy of Sciences (2012) and the National Academy of Medicine (2017). He is an editor of Genome Research and has served on various scientific advisory boards for both NIH and NSF. His research group provided the first genome-wide view of segmental duplications within human and other primate genomes and he is a leader in an effort to identify and sequence normal and disease-causing structural variation in the human genome. The long-term goal of his research is to understand the evolution and mechanisms of recent gene duplication and its relationship to copy number variation and human disease with a specific emphasis on the genetic architecture of autism and neurodevelopmental delay.