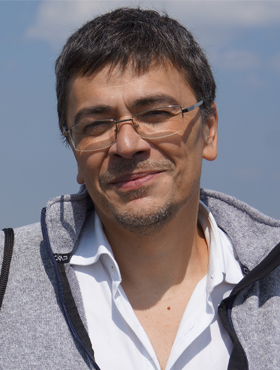 Dr. Barco conducted his Ph.D. thesis investigating the molecular mechanisms of cytotoxicity by poliovirus in the lab of Dr. Carrasco (CBMSO, Madrid). After defending his thesis (1996), he conducted a brief postdoc in the same lab before moving to Columbia University in New York (USA) where he joined the group of Nobel laureate Prof. Kandel to work in the molecular mechanisms of learning and memory. Among other findings, his research there helped to explain how synaptic specificity is achieved after nuclear activation by synaptic inputs and pioneered the field of neuroepigenetics. In 2004, he moved to the Instituto de Neurociencias (IN, CSIC-UMH) in Alicante, where he established his own research group thanks to the support of the Marie Curie Excellence Grant Program. He obtained a tenured position at the Spanis Research Council (CSIC) in 2007, and was later promoted to CSIC Research Professor (Full Professor equivalent). His group at the IN works in neurogenomics and neuroepigenetics. They investigate the relationship between epigenetic marks in neuronal chromatin, gene expression and neuronal plasticity in physiological and pathological conditions. The Barco’s lab has a prominent international presence and has consolidated its position as a leading laboratory in the field of transcriptional and epigenetic control of neural plasticity.