There appears to be two misc band in the wildtype & heterozygous samples at ~ 400 bp & ~440 bp with both kapa & KLR taq.
These misc bands are more than likely from the amplifying of the two other loci as mentioned by Kevin.
The genotyping protocol(s) presented here have been optimized for reagents and conditions used by The Jackson Laboratory (JAX). To genotype animals, JAX recommends researchers validate the assay independently upon receipt of animals into their facility. Reaction cycling temperature and times may require additional optimization based on the specific genotyping reagents used. 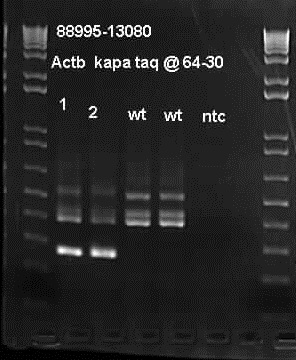 JAX uses a very high speed Taq (~1000 bp/sec), use cycling times recommended for your reagents.
JAX uses a 'touchdown' cycling protocol and therefore has not calculated the optimal annealing temperature for each set of primers.

This is the only strain that uses this protocol.